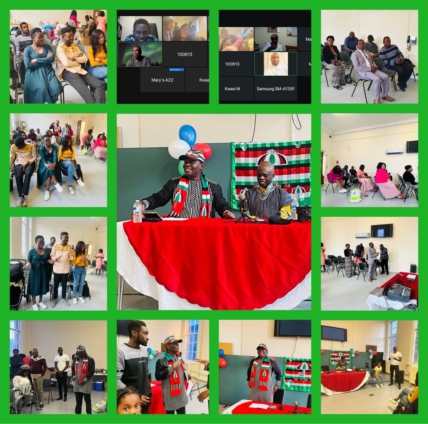 The Glasgow Branch of the National Democratic Congress (NDC) has held its maiden hybrid meeting as part of activities earmarked in preparation for the 2024 Presidential and Parliamentary elections.

The event, which took place on August 7, 2022, forms part of the party’s reorganisation effort as well as fosters unity within its rank and file.

The leadership of the branch also seized the opportunity to deliberate on pertinent strategies to adopt in annexing power in the ensuing general elections.

Speaking at the event, NDC Chairman of the Glasgow Branch, Dr John Ayanaba, expressed his appreciation to the members and executives for their relentless efforts towards achieving victory in the 2024 polls.

According to him, unity among members is an enviable feat that must be jealously guarded if the Umbrella emblem is to return to power to stir the affairs of the nation.

He is optimistic that, “with God at the helm of affairs, our efforts will not be in vain but rather be crowned with a resounding victory in 2024.”

In his address, a founding member of the Glasgow Branch and Chairman for the occasion, Mr. Frank Nyame, urged members to leverage the event by fraternising and rallying their support behind the party in order to wrestle power from the NPP government.

He called on the members to regard the challenge ahead of them as a clarion call to save Ghana from the clueless Akufo-Addo’s regime.

The Member of Parliament for Ho West Constituency, Emmanuel Kwasi Bedzrah, was very excited to participate in the maiden hybrid meeting of the Glasgow branch of the NDC.

He lauded the leadership of the branch for a good job done in the diaspora.

Despite being a young branch, Mr. Bedzrah enumerated many remarkable successes chalked by the local chapter of the NDC since its inauguration in 2022. He admonished the leadership and the entire party membership not to rest on their laurels until victory is won in 2024.

The Ho West MP also took members through the operations of Parliament and succinctly touched on scandals that involve some NPP government officials that the Minority is bent on exposing their rot to the Ghanaian people.

The MP also clearly explained issues relating to the Techiman South shootings and the position of the Minority Caucus.

He indicated that the Minority Caucus in Parliament has resolved to keep the government in check despite the attacks and vilification they receive on a daily basis for just doing their duties enshrined in the 1992 Constitution of Ghana.

The Member of the House Committee of Parliament entreated party members in the diaspora not to give up on the NDC as it is the only hope to salvage the country from its present predicament. He tasked members to “continue to avail themselves to the party and also be willing to adopt a branch in Ghana to support the party through the provision of logistics.”

Dr. Andy Dake, admonished members to make time for themselves and pay critical attention to issues pertaining to their mental health.

He enumerated some lifestyle activities that could affect one’s mental health and also professed some solutions.

The medical professional is of the view that stigmatisation appears to be one of the key factors impeding people from declaring their state of mental health.

He noted that a remedy to salvage the situation is through proper education and being each other’s keeper, as everyone is a potential schizophrenia patient.

Dr. Dake also touched on medications for mental health issues that must only be prescribed by a registered health professional.

“Health is wealth. As such, we should not be shy about asking for help whenever we feel low on events like the demise of a loved one, disappointments, etc. These are life events that could happen unannounced, but our ability to be honest about how we respond to these unforeseen occurrences is what will eventually culminate in our state of mental health,” Dr. Dake stated.