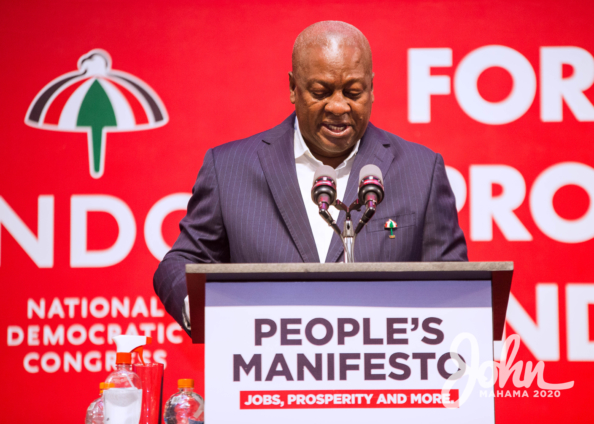 The Eastern Regional Secretariat of the National Democratic Congress (NDC) has scored the Akufo-Addo led government 14.28% in the fulfilment of their 2016 manifesto promises to the Eastern Region.

According to them, President Akufo-Addo and the governing New Patriotic Party (NPP) have failed the Eastern Region, delivering only a fraction out of the many promises made to the region.

According to the Eastern Region NDC Secretariat, out of the 3 projects attributed to the NPP, only one had been fully delivered. The others were either still ongoing or partially delivered.

Their assertion is to support the claim that the erstwhile Mahama-led administration had a superior record of achievements in the Eastern Region as compared to the ‘paltry’ performance of the Akufo-Addo government.

On this account, they noted that President John Dramani Mahama distributed development equitably within the Eastern Region and therefore has a “superior record of achievement in the Eastern region”.

These comments were made at the maiden edition of the “Eastern: ‘εfie nyε’ series” by the Communications Bureau of the National Democratic Congress, Eastern Region, Tuesday.

They also alleged that most projects initiated under the Mahama government which was neglected by the NPP have suddenly seen work resume as the country nears the December polls.

They described the renewed interest in the projects as a ‘Sakawa’ tactic by the NPP to get the people of the Eastern Region to vote them into power; a move the NDC say will not yield any positive results for the NPP.

“The people of the Eastern region call these roads “Sakawa” campaign projects. In fact, ‘Sakawa’ projects that are only meant to deceive them for votes. But they are wide awake and have promised to punish Nana Akufo-Addo for taking them for granted for over three and half years since 2017; only to surface few months to elections with deceitful projects. It is abundantly clear that, ‘Eastern: εfie nyε’!,” the NDC stated.

According to them, should the NDC be voted into office, they will ensure that the Eastern Region receives a fair share of the national cake through the equitable sharing of John Mahama’s $10 billion for the Big Push Infrastructure Plan.

“We trust John Mahama to deliver and create opportunities for all because of his massive infrastructure record,” they emphasized.

Among other things, the Eastern Region NDC Secretariat stated that they trust the next Mahama-led Administration to bring the much needed infrastructural development in the region as well as create 1 million jobs for the youth in the region and the country as a whole.

DISCLAIMER: The Views, Comments, Opinions, Contributions and Statements made by Readers and Contributors on this platform do not necessarily represent the views or policy of Multimedia Group Limited.
Tags:
Eastern Region
NPP and NDC manifesto