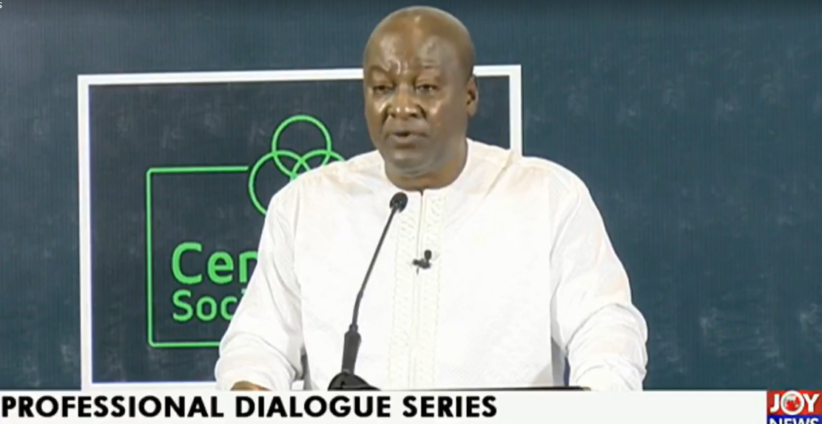 The flagbearer for the National Democratic Congress (NDC), John Dramani Mahama has said his government will improve the Free SHS programme when voted into power.

Mr. Mahama mentioned that, during his first term of presidency, he will work to eliminate congestion on the double-track school system. He also said he will fully support skills for technical and vocational training.

He revealed this during a professional dialogue series in Accra on October 26, 2020.

“My interest in TVET gained firm roots when I expected an oil and gas project and I was informed by the supervisor that they often have to bring in professional welders and other professionals from outside the country because Ghana just did not have enough of such trained personnel to deliver according to specifications and time schedule,” he said.

“From that moment I decided that we needed to brand TVET from the basic level to the technical University level so that our young people can be equipped with the needed skills, knowledge and qualifications and be well-positioned to take advantage of the numerous employment opportunities or alternatively to employ themselves and others,” he said.

The presidential candidate stated that a future NDC government will initiate the Free National Apprenticeship Programme where the services of master craftsmen and partisans engage and pay for in the communities to equip and train the young people including youths in urban areas.

According to him, the newly passed out trainees in vocations such as dressmaking, catering, hairdressing, plumbing among others will be given equipment to start up their own businesses in other to earn a living for themselves.

“We believe the NDC’s 1 million jobs plan and free TVET and national apprenticeship programme as contained in the people’s manifesto are important because the failure to create jobs for the team youths could prove disastrous for this nation,” Mahama said.

He explained that the NDC will initiate the digital economy which seeks to train many computer programmers to promote youth development.

On formal education, Mr. Mahama added that pre-schools and basic schools will be strengthened and improved to ensure quality teaching and learning.

The NDC flagbearer said his administration will complete the abandoned day schools as well as the expansion of existing infrastructure and inclusion of private schools in the implementation of the Free SHS programme.

This, he said, will address congestion and ensure quality teaching and learning for all children.

DISCLAIMER: The Views, Comments, Opinions, Contributions and Statements made by Readers and Contributors on this platform do not necessarily represent the views or policy of Multimedia Group Limited.
Tags:
Election 2020
Free SHS programme
John Mahama
National Democratic Congress
TVET