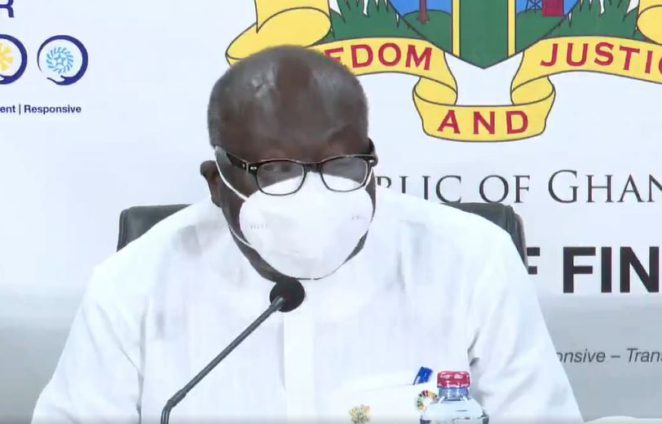 According to the Finance Minister, the opposition National Democratic Congress (NDC), is not a reliable entity to fall on when discussing measures to be implemented to save the Ghanaian economy.

His comment is in reaction to concerns by Dr. Cassiel Ato Forson, that government’s fiscal measures to salvage the economy and restore investor confidence would yield no result.

In a tweet, he wrote: “The fiscal measures announced today are just cosmetic and empty. It will further erode confidence in the economy”.

But speaking to the press on Thursday, Mr Ofori-Atta stated that it is the opposition party’s duty to state their response on government initiatives, however, Ghana would have been worse-off if interventions from the NDC were implemented by the incumbent government.

“Let me be very clear. If I had followed an NDC programmed economic transformation for this country, we would not be here,” he stressed.

For Dr Ato Forson, who is a former Deputy Finance Minister, government should rather place a moratorium on new loans, cut 2022 foreign-financed projects by at least 50 per cent, and “deliver on promise to review all flagship programs.”

But the Finance Minister believes that if Dr Ato Forson was committed to boosting investor confidence, the Minority in Parliament would have passed government’s revenue measures.

“We have all been partners in seeing how the economy was run from 2017 to 2019 and it is very clear the impact of Covid-19 on this economy, yet still we have been able to see some growth within that period.

The issue therefore of investor confidence, is he (Ato Forson) going to take responsibility for his inability, maybe, and for his party not passing our revenue measures in the House?”

Mr Ofori-Atta indicated that the Minority’s failure to support government led to Ghana’s downgrade and its inability to go to the international market in the first quarter.

Due to this, the sector Minister said “we (government) went out with a 20 per cent cut, so that we can shrink our expenses to make sure we still meet a 7.4 per cent that we have promised.”

The Finance Minister, therefore, called on Dr Ato Forson to stop the “negative words” as such actions “do not help the spirit of the country.”

In February this year, Moody’s Investors Service (“Moody’s”) downgraded the Government of Ghana’s long-term issuer and senior unsecured debt ratings to Caa1 from B3 and changed the outlook to stable from negative.

Moody’s estimates that interest payments will absorb more than half the government’s revenue over the foreseeable future, which is exceptionally high compared to peers at all rating levels. As a remedy, the government has proposed sharp fiscal consolidation and a switch to borrowings from external partners on more favourable terms.

But the Finance Ministry appealed against the downgrade of the country’s credit rating to Caa1, from B3 by ratings agency Moody’s.

The Ministry cited the omission of key material information from the assumptions driving some of Moody’s forecasts and projections such as the 2022 budget expenditure control measures, the 2022 upfront fiscal adjustments and inaccurate balance of payment statistics as well as the appointment of a new primary credit analyst, only four weeks prior to such a major credit rating decision as the major reasons.

It also questioned the committee’s refusal to consider deferring such a  monumental rating action until the analyst had enough time to more fully understand both the quantitative and qualitative aspects of the Ghana credit story.

Meanwhile, Finance Minister, Ken Ofori-Atta, has revealed a wide range of plans to salvage the country’s economy. They include;

To find out other measures put in place by government, click on the hyperlink.

DISCLAIMER: The Views, Comments, Opinions, Contributions and Statements made by Readers and Contributors on this platform do not necessarily represent the views or policy of Multimedia Group Limited.
Tags:
Dr Ato Forson
Ken Ofori-Atta