Nigeria's Buhari saga: The fake wedding, the president and the family feud - MyJoyOnline.com

Nigeria’s Buhari saga: The fake wedding, the president and the family feud 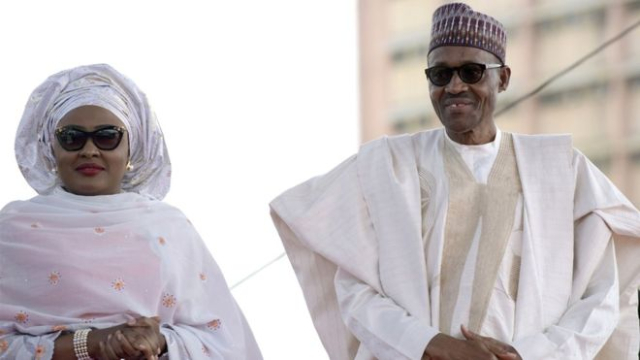 Nigeria’s first family, the Buharis, are embroiled in a still developing story resembling one of Nollywood’s many Sunday evening soap operas.

It is a story about the president purportedly taking a second wife – a female cabinet member to boot – while his wife’s furious outburst hint at deeper issues. The plot was supplied by Nigeria’s vibrant social media and was aided by Mrs Buhari’s cryptic comments. The setting is Nigeria’s presidential villa, Aso Rock.

What’s all this talk about a wedding?

The wedding at the centre of the story that was largely played out on social media involves President Muhammadu Buhari, and one of his female cabinet ministers, Sadiya Farouq.

What we do know is that President Muhammadu Buhari is married to Aisha Buhari and has not said anything about taking a new wife.

Ms Farouq has also not said anything about the purported marriage.

It could easily have been dismissed as fake news and left at that but for a comment from Mrs Buhari.

What did Aisha Buhari say?

She had been out of the country for two months with a stop in the UK for a medical check-up. Her return on Saturday was taken by those following the story as a sign that she had come back to “defend her territory”.

Her response when asked about the wedding at the airport did little to extinguish rumours that the president was taking another wife.

In an interview with BBC Hausa, the first lady offered confirmation, albeit in a very cryptic way, that there had indeed been plans for President Buhari to take a second wife, by referring to a “promise of marriage”. She also said that the purported bride-to-be was disappointed the marriage hadn’t taken place.

Mrs Buhari said: “The person that promised her marriage didn’t know it wasn’t going to happen. She [believed to be Ms Farouq] didn’t deny the marriage until the day passed.”

She spoke entirely in Hausa, measuring her words and mentioning no names. But it was clear from listening to the interview that Mrs Buhari was upset that Ms Farouq hadn’t publicly denied rumours of the marriage. 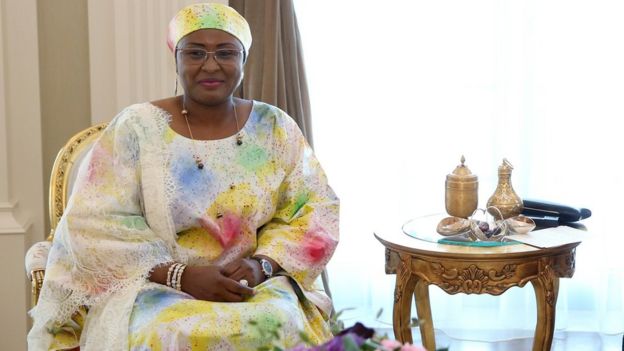 To further complicate matters, the minister’s Twitter account denied commenting on rumours of the marriage, refuting claims made by a fake account in her name that had actually denied the rumours.

“I wish to inform my followers and well-meaning Nigerians to disregard the handle and any information posted on it. My official Twitter handle remains @Sadiya_farouq”. 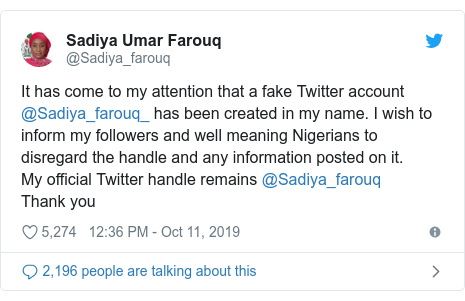 Some say she missed an opportunity to quash the rumours with a firm denial.

So who is Sadiya Farouq?

At 45 years, she is one of the younger ministers in Mr Buhari’s cabinet and heads the newly created Ministry of Humanitarian Affairs, Disaster Management & Social Development.

Little was known of her before she was appointed by Mr Buhari in August to lead the newly created ministry. The creation of a new ministry and her appointment came as a surprise to many, but those who know her say she’s been a staunch supporter of the president for decades. 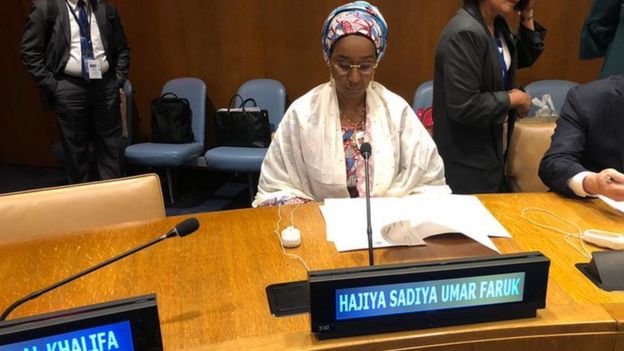 She was head of the country’s National Commission for Refugees, Migrants and Internally Displaced Persons (IDPs) and was a member of the ruling All Progressives Congress (APC) presidential campaign council, where she was in charge of election planning and monitoring, field operations, and fundraising.

So was there a wedding?

The wedding was supposed to have been planned last Friday, 11 October, but the Twitter account of Sadiya Farouq showed she was far away in the Swiss city of Geneva from Thursday, leading Nigeria’s delegation to a meeting of the United Nations refugees agency.

She did not return to Nigeria until Tuesday, based on what she posted on the same account.

But that didn’t deter Nigeria’s social media users, especially on Twitter, from providing the guest list, a venue and entertainment.

This user even designed the wedding card: 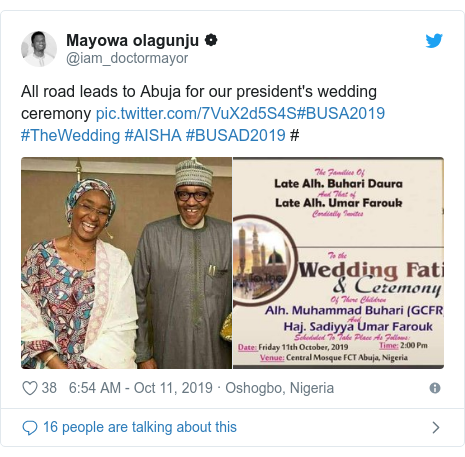 A Nigerian wedding is not complete without an aso-ebi, the colourful attire worn by close friends and family on the day. This user recycled an old photo not related to a wedding: 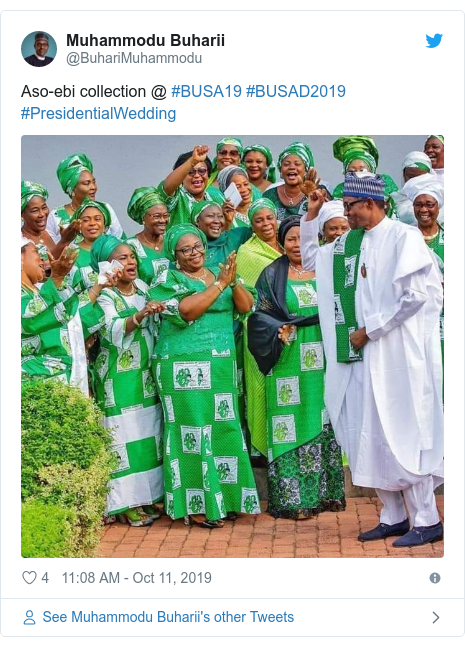 And what’s all this about a family feud?

A sub-plot to the fake wedding story is the strained relations between different members of the wider Buhari family.

We now know, courtesy of that BBC Hausa interview, that a viral video that circulated on social media of Aisha Buhari in an angry outburst was genuine. She confirmed the authenticity of the video which she said was recorded by a relative of the president who lives in Aso Rock, some time in 2018.

Mrs Buhari says the video was filmed by Fatima Daura, daughter of Mamman Daura. He is Mr Buhari’s nephew and has been a close associate of the president. He holds no official position in the government but is widely believed to wield huge influence over the government.

He was even given an apartment – The Glass House – in the presidential villa that was the scene of the outburst in the video.

According to Mrs Buhari: “They shot the video in front of my security and everybody there. She [Fatima Daura] was actually recording the whole thing right in front of me and was laughing and mocking me.

“They did that because my husband sacked them from the house. He told them to get all their belongings and leave the house for my son [Yusuf] to occupy.

Fatima Daura had responded to Mrs Buhari’s interview, saying: “If one reasons well, he or she will understand that it is not possible to say that the wife of the president is denied access to her apartment.”

Nigeria’s presidency is yet to say anything about the video but on Wednesday, Mrs Buhari posted an apology on Instagram, saying: “I use the opportunity to apologise for the embarrassment I might have caused my children, my immediate family members, well meaning Nigerians and the institution I represent, on the circulated leaked video clip”. 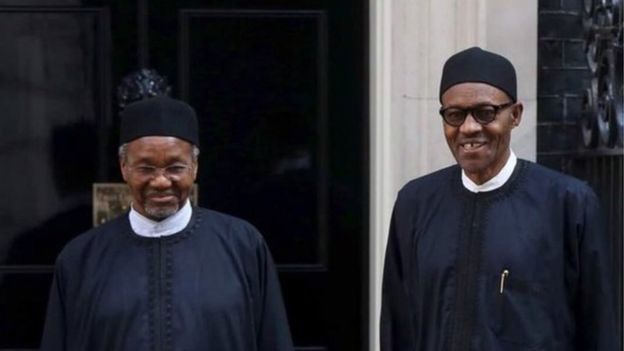 Aisha Buhari didn’t say who was planning the marriage, but it is clear she knows who it was. Some people are speculating that her willingness to confirm the authenticity of a video from 2018, in which she mentioned Mamman Daura and his daughter Fatima, was another cryptic message.

Ms Daura denies that a wedding was being planned, telling BBC Hausa that both her father and the president are “monogamists”. She also said that “the kind of power and influence that is being ascribed to my father is only attributable to God”.

So is the wedding still on the cards? 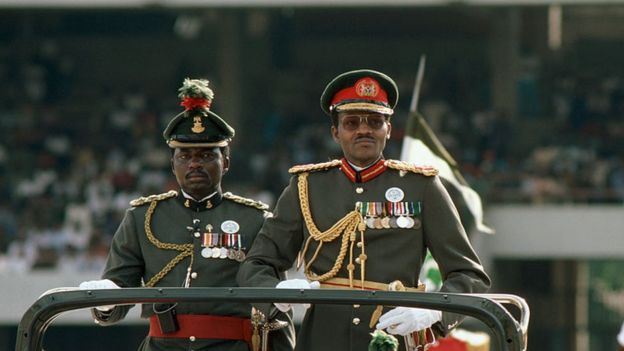 That would depend on if it was on the cards in the first place.

If people were planning it, they might not have altogether abandoned those plans.

If there’s anyone who would know the signs of a new marriage in the making, then it’s Mrs Buhari. She married the president after he divorced his first wife in 1988. The president is known as a monogamist but as a Muslim, he is allowed to take up to four wives.

Mrs Buhari was clearly referring to Ms Farouq as the intended bride in the BBC Hausa interview and the fact that neither the minister or the president have said anything about the rumoured marriage has many wondering if, like a true Nollywood soap, this story might have a sequel.