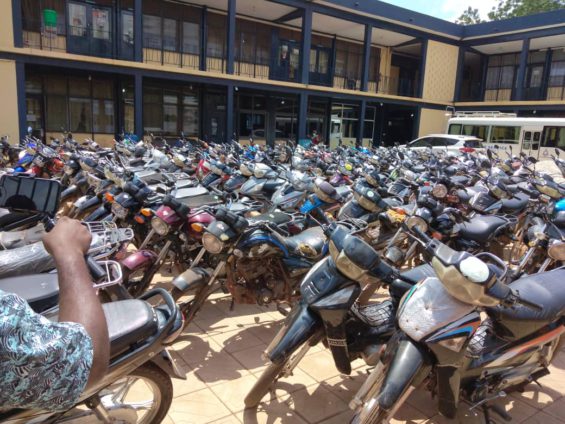 Out of the 344 motorbikes impounded, 285 were unregistered, five tricycles without registration and 59 cases of riders not wearing helmet.

The joint operation with the Road Safety Commission and the Driver, Vehicle Licenses Authority is to tackle the upsurge in traffic offences and to clamp down on lawlessness in the Metropolis.

This, the command believes will ensure sanity on the roads and safety of riders.

Addressing a press conference in Tamale, the Northern Regional Police Commander, COP Timothy Yoosa Bonga said the capital has had some challenges with road traffic law violations and deaths associated with people not wearing helmets.

He said the exercise, which was conducted around the police headquarters, revealed the magnitude of the offences.

“We started within the police environment to make sure that even our security personnel comply with the law, within this short hours that we commenced this exercise this morning, the number of motor bikes that have been arrested total 344,” COP Yoosa Bonga said.

He said the major reason why it’s important for people to register their motor bike is because many robberies are conducted with unregistered motor bikes therefore when people register, it makes it easy to fight crime.

”Most of the armed robbery cases, the means they use to facilitate their movement is unregistered motor bike and so we want to ensure that within the region, you register your motor bike and this will limit in a way, the perpetuation of such crimes,” he said.

COP Timothy Yoosa Bonga said if everybody registers their motor bikes, there will be no unregistered motor bikes for robberies in the area.

He added that when people register their motor bikes, it also serves as disincentive for thieves to target such bikes.

“It will help protect properties, thieves will not come easily and take the motor bikes, they will not be attracted because it is registered,” the commander said.

COP Timothy Yoosa Bonga called for the support of the media to continue to create awareness on the need for people to wear helmet and register their motor bikes.

“We need your support to continue this exercise so that we can save lives, prevent crime and safe property,” he added.

He said enough sensitization has been held in churches, mosques and several public places including using the various radio stations.