Patrick Acham: #FixTheCountry demonstration not a good recipe for an institutional change 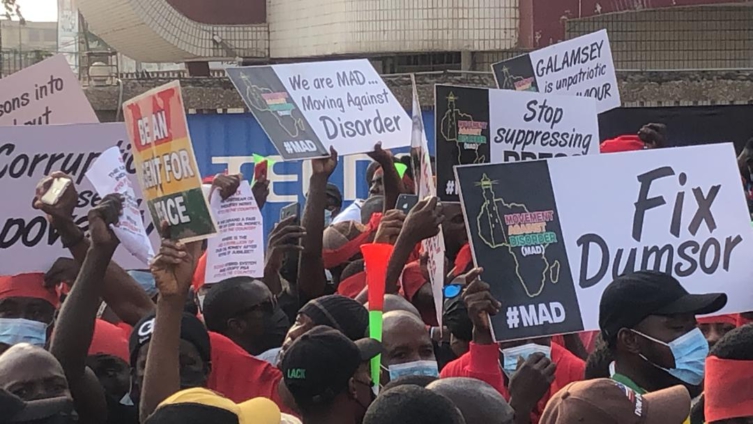 I’ve closely followed the #FixTheCountry mantra, and it is, in my opinion, a movement that if successful, will right certain wrongs in Ghana.

It is obvious that the goals pursued by this movement are somewhat in the national interest. Who, in his right mind, does not want good roads, a quality healthcare system, a quality and affordable education system, low fuel prices, a favorable legal environment for business, improved security, and job opportunities?

It is only a beast that does not want the system to work to bring to reality the aforesaid goodies.

However, one of the vexing concerns that many critical thinkers continue to ponder is whether or not this is the movement that would propel Ghana into the orbit of good governance and prosperity.

There are macro and micro-level factors required for the success of any movement in the history of mass movements.

At the macro-level there are four conditions for a movement to succeed: First, discontent and dissatisfaction with basic life conditions abound – hardship, corruption, and a lack of freedom – and traditional means of finding remedy are either denied or ineffective.

Second, beliefs, values, and ideologies filter and shape dissatisfactions, turning them into grievances against the system and promising to fix these issues. For example, corruption is not a personal flaw of some leaders who should be replaced; it is endemic and only another regime or form of government can stop it.

Thirdly, the capacity to act collectively exists (also referred to as mobilization), such as freedom to organize, civil society, access to means of mass communication.

Finally, political opportunities, such as regime divisions, foreign backing for dissidents, government legitimacy, and the like, improves the likelihood that the protest’s goals and demands will be met due to the target’s vulnerability.

For collective action to take place, all four conditions must be met. Even if one of these conditions is missing, challenge becomes difficult, implausible, and futile.

At the micro-level, people must determine whether or not to engage in the challenge, as well as when and how they will do it.

Their decision is based on their judgments and expectations of the amount of other people who will join the challenge and its prospects of success, as well as the four macro factors – specifically, how unsatisfied they are, whether they have an anti-regime ideology, and so on.

People consider the projected rewards and expenses in this situation and choose the activity that provides the greatest net benefit.

Challengers’ goals are purely for the benefit of the general public (reforms, the overthrow of the regime, freeing political prisoners, free elections, and so on).

This inevitably necessitated a gathering of agitators and protestors of various classes, ages, regions, and religions.

Does the present fix the country mantra meet the above criteria? In the vast majority of cases no.

It is beyond argument that politics in Ghana in the 1978s used to be a united majority against a united minority at the helms of affairs and this explains why the Union Government concept of the Acheampong regime was moribund at birth.

During that time, as a result of economic conditions growing worse, various groups such as the Ghana Bar Association, the Ghana Medical Association, and National Union of Ghana Students (NUGS) began to mount pressure on the government for a return to constitutional rule.

The Christian Council and the Catholic Secretariat both fought back hard against the frantic attempts to establish unigov.

The rise of the People’s Movement for Freedom and Justice, the most adamant resistance, was the final nail in the coffin (PMFJ).

This group featured politicians from both sides of the political spectrum, including William Ofori Atta, K. A. Gbedemah, A. A. Afrifa, and others like as Adu Boahen, G. W. Amartefio, and others.

Recognising how effective and powerful citizens acting in unison can be, politicians decided to break the people’s strength by fomenting everything that could weaken citizens united for collective action, by promoting dissension among them, following the lifting of the ban on party politics following the implementation of the 1992 Constitution, partisan politics has headlong entered every workers’ organization, traders associations, professional bodies, and educational institutions.

Partisan entities such as TESCON and TEIN have been purposefully established across the country’s higher educational campuses in order to divide the ranks of students so that they will no longer be a source of concern to the government any government.

Also, a very critical and unfortunate scenario that will make the fix the country movement not to succeed is the partisan nature it has assumed.

The problems of Ghana that are supposed to be fixed are not only limited to this current government but systemic problems that need a complete overhaul in the institutional design of this country.

The politicians have successfully put the citizenry united in indissoluble bonds to defend them. This has created blind political loyalty which serve as fetters to critical and rational thinking among the ordinary citizens and this has irretrievably produced “conscientious ignorant” citizens incapable of asserting their political and economic rights.

Whereas the politicians act as enemies only to the gallery, they are disguisedly united in the hope of common plunder and rapine of the national exchequer.

With this relationship that exists between rulers and the ruled, the ordinary citizens continue to be burden with taxes necessary to support the luxury of the power holders, and this has resulted in the privileged few gorging themselves with superfluities, while the starving multitude is in want of the bare necessities of life.

What, then should be done? The movement needs to widen its support based by inculcating in the rural folks the need for a complete change in the governance and politics architecture of the country.

The movement must be able to produce citizens that will animate the zeal of leaders by showing them, without flattery or fear, the importance of their office and the severity of their duty.

Political leadership must be aware that to neglect the redress of grievances whether private or public is dangerous and therefore urgent and responsible steps should be taken to ameliorate, if not to eradicate the growing dissatisfaction with the system.

To conclude, looking at the conditions at both the macro and micro-level needed for a movement to succeed, obviously, the fix the country mantra as it is currently, is not the movement that can draw the attention of leadership to fix the country.

This is because this movement is merely urban, elite, and social media-based.  A movement that draws support from all walks of life – the rural folks, urban residents, professional groups, religious, and students is what is needed to catch the attention of political leaders.

There are things to be fixed, and according to Plato, the perfect felicity of a kingdom consists in subjects’ adherence to their rulers, rulers’ obedience to the laws, and laws that are reasonable and continually devoted to the public welfare.

The system must be fixed.

About the author; Patrick Acham is a National Service Personnel at the University of Ghana Political Science Department. pacham@st.ug.edu.gh