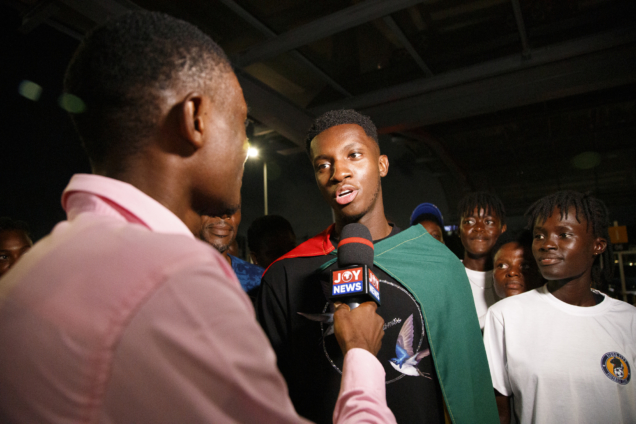 Arsenal forward, Eddie Nketiah, has arrived in Ghana to see family and friends as well as enjoy his short holiday.

The 23-year-old touched down at the Kotoka International Airport on Tuesday, November 15, at 21:00 GMT.

Upon his arrival, the player was met by his father and mother as well as other relatives present. The players of Ghana Women’s Premier League, Ridge City were also on hand to welcome him.

The forward missed out on a place in Gary Southgate’s final 26-man England team for the 2022 FIFA World Cup.

He is expected to be in Ghana for some days as part of his visit before returning to London as Arsenal prepare for a mid-season tour.

In the current season, Nketiah has been directly involved in four goals for Mikel Arteta’s side, scoring three goals and providing one assist across all competitions.

With Ridge City being heavily involved, Nketiah will also visit the club’s training ground in the coming days before his departure.

The former Leeds United striker was born to Ghanaian parents in London and lived in England for the majority of his life with occasional visits to Ghana.

He was then called up to the first team by former manager, Arsene Wenger for the club’s pre-season tour to Australia and China the following season.

He also won the MTN FA Cup with the Gunners during the 2019/20 campaign.

On the international, Nketiah, who is still eligible to play for the Black Stars, has featured for England’s youth teams and was part of the 2018 England U21 team that won the Toulon Tournament.

Here are images of Nketiah’s arrival as shot by the Ridge City media team:

DISCLAIMER: The Views, Comments, Opinions, Contributions and Statements made by Readers and Contributors on this platform do not necessarily represent the views or policy of Multimedia Group Limited.
Tags:
Arsenal
Eddie Nketiah
Lawrence Baidoo
Ridge City