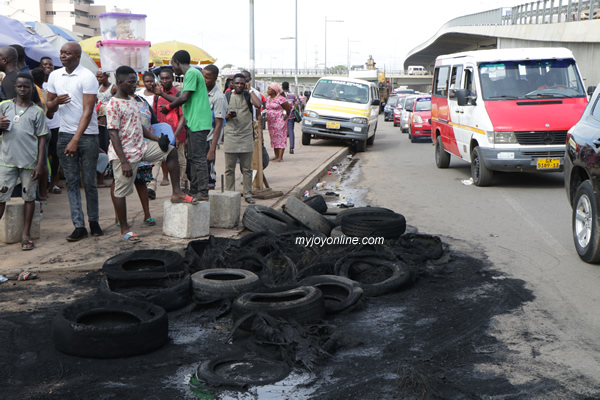 An eviction of commercial drivers from a parcel of land at Ring Road popularly known as Circle in Accra has sparked agitation.

Youths in the ‘Obra Spot’ area under the Kwame Nkrumah Interchange burnt used car tyres after a team of military officers escorted an evacuator into the transport station, Thursday.

According to the chairman of the commercial drivers’ union, Vincent Kofi Kpodo, a man who claimed to be from National Security who gave his name as Dr Botchwey came to announce to them three days ago to relocate.

They were told, the land had been sold to a developer.

According to him, at dawn Thursday, well-built men and armed soldiers besieged the bus station ordering that all vehicles should be parked out.

The drivers said they have no papers entitling them to the land.

According to Mr Kofi Kpodo, Ga chiefs, Gbesie and Korle mantse gave them the property to be used as a bus station.

“They have told us not to move an inch,” he told JoyNews’ photojournalist David Andoh.

Fire service personnel and police officers arrived at the scene after billowing smoke from the burning tyres attracted their attention.

A soldier was seen manning an excavator while youths in that enclave expressed anger over the attempted eviction.

The police are yet to make a statement on the incident.

DISCLAIMER: The Views, Comments, Opinions, Contributions and Statements made by Readers and Contributors on this platform do not necessarily represent the views or policy of Multimedia Group Limited.
Tags:
Commercial drivers
Eviction
Kwame Nkrumah Circle
Obra Spot