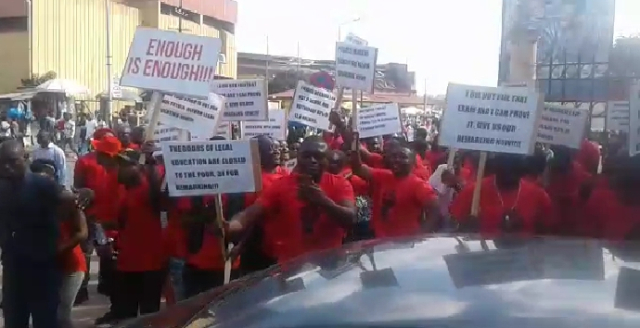 Law students who protested against “archaic legal education system in Ghana” have described as lies police account of what transpired during the protest.

In a statement on Monday, the students refuted allegations contained in a police release that those who demonstrated were lawless.

“No student sat on the streets of Makola nor blocked traffic.  No student threw stones nor used offensive weapons at the police.

“At no point did any student provoke the police to warrant this unwarranted use of excessive force,” portions of the students’ statement read.

The demonstration which was to protest against mass failure recorded in last month’s Ghana School of Law entrance examination was dispersed by the police with rubber bullets and spraying of water from cannons.

According to a police statement explaining the use of force to disperse the protestors, the demonstrators had prevented a Deputy Attorney General, “Godfred Yeboah Dame from leaving his premises.”

The police said the demonstrators “sat down in the middle of the road and prevented the free flow of traffic.”

These and many other claims contained in the police statement have been denied by the demonstrators.

They have described the police action as shameful.

Aside from demanding an unqualified apology from the police, they want perpetrators of the violence sanctioned.

“We are therefore calling on the Inspector General of Police (IGP), the Police Council and the Commission on Human Rights and Administrative Justice (CHRAJ) to thoroughly investigate this brutal attack on innocent Ghanaians and take appropriate disciplinary actions against any police officer found culpable in this shameful conduct,” the statement demanded.

The full statement from the law students is posted below.

DISCLAIMER: The Views, Comments, Opinions, Contributions and Statements made by Readers and Contributors on this platform do not necessarily represent the views or policy of Multimedia Group Limited.
Tags:
Ghana School of Law
Law students demo
Legal Education
Protests