Prince Osisiadan: Keta coastal flooding: Is it a warning for Ghana about climate change? 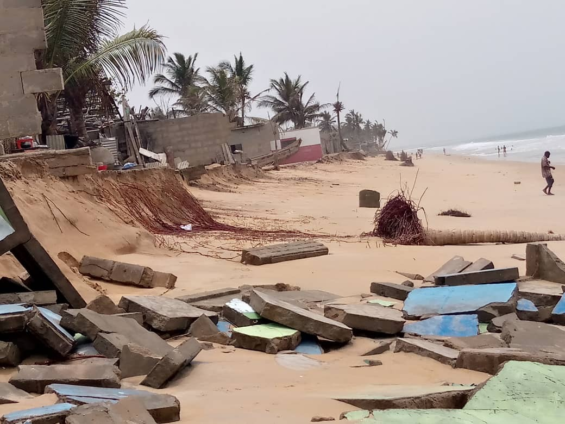 High tidal waves hit the people of Keta municipality in Ghana at the dawn of November 07, 2021, causing flooding of several inland areas (such homes, schools, places of worships, etc.) and displacing at least three thousand people, including children and women according to a local media reports.

This has been a perennial problem affecting the coastline of Keta Municipality in the Volta region of Ghana. In an attempt to resolve this challenge, the government of Ghana started the Keta Sea Defence project as a resilient strategy to deal with the possible impact of the high tidal waves.

The unique features of this year’s tidal wave event are that it occurred later in the year than expected and the severity was unprecedented when compared to previous years.

The question is, “were the delay and severity of this year’s event caused by climate change? There is no straightforward answer since there could be several reasons for this occurrence, but as Climatologist Kevin Trenberth once said in his article in the Climate Journal that “All weather events are affected by climate change because the environment in which they occur is warmer and moister than it used to be.”

Reports issued by the United Nations Intergovernmental Panel on Climate Change (IPCC) and extreme events happening in other parts of the world (such as Germany, Italy, Belgium), suggest that the coastal flooding at Keta Municipality may be linked to the effects of climate change.

One of the most significant outcomes of rising sea levels is the occurrence of coastal flooding. The floods reduce the gap between the average sea level and the height of the land.

There has been enough evidence that human-caused warming has raised the rate of sea level. The Intergovernmental Panel on Climate Change (IPCC) stated in its report issued on August 07, 2021, that “the global mean sea level increased by 0.20 [0.15 to 0.25] m between 1901 and 2018. Also, there is enough evidence to suggest that human influence was very likely the main driver of these increases.”

One-third of the solar radiation is reflected into space by the atmosphere and the earth’s surface (land, ice and ocean). The earth, especially the oceans, absorb the rest. The earth reradiates the energy it has absorbed mainly in the form of heat of infrared radiation. Therefore the effect of blocking the heat from escaping from the earth’s surface could lead to warming the earth.

The greenhouse (GHG) gases, including water, carbon dioxide (CO2), nitrous oxide (N2O), methane (CH4) emitted by human activities trap some of the radiated heat and act as a blanket that helps keep the planet as much 60f warmer than it otherwise would be, which is ideal for us humans.

Lastly, the fight against climate change is not the government’s alone. Individual personal decisions go a long way to prevent climate change. A simple example is opting for leaves instead of plastic containers for your waakye.

DISCLAIMER: The Views, Comments, Opinions, Contributions and Statements made by Readers and Contributors on this platform do not necessarily represent the views or policy of Multimedia Group Limited.
Tags:
Climate change
Ing. Prince Osisiadan
Keta Tidal waves