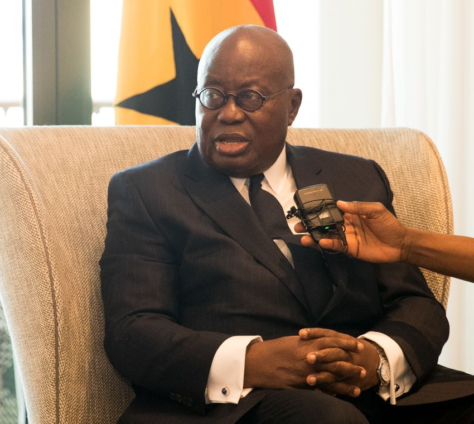 At a breakfast meeting with industry captains and businessmen in Accra on Monday, the President said the private sector was the surest bet to reboot the economy, which is presently undergoing fiscal challenges.

The call comes in the wake of the Government’s push to hold formal talks with the International Monetary Fund (IMF) for a support package to rescue the country’s economy which has been beaten by the COVID-19 pandemic, inflation and a depreciating currency.

President Akufo-Addo at the meeting said it was imperative that the private sector played a focal role in the economic transformation of the country because other countries that are doing well got to their present state of development solely on the wings of the private sector.

“We cannot do anything serious if we are not guided by history and example,” he said, citing the development of the four ‘Asian Tigers’- South Korea, Singapore, Hong Kong and Taiwan- where private capital pushed the rapid economic growth and development of those nations.

The President pointed out that rural, agrarian primary produce and exporting countries that transformed themselves from low productivity economies to high economies “have been nations where private sector had been the dominant force in their economic growth and development.”

“Japan, Korea, Asian Tigers all these names that are now part of the common vocabulary are the names of people. Hyundai, Toyota, all names of people who founded these enterprises that have now become worldwide entities… That is the example that has always inspired me, my career as politician.

“The private sector of our economy would be the lead vehicle for the social and economic transformation we are all looking for,” he emphasized.

However, President Akufo-Addo agreed that private sector development had been a difficult challenge for successive governments, but stressed that it was imperative to identify areas, where government and the private sector could profitably work together to achieve sustained growth and development of the country.

He said the breakfast meeting, aimed at soliciting and exchanging views with private sector players on Ghana’s policy direction and investment climate, underscored the importance and central role of the private sector to the economic growth of the country.

The Government, he said, had and would continue to pursue and initiate policies, interventions and incentives, and engender conversations that would enable private sector players, particularly those in the pharmaceutical, manufacturing, logistics, aviation and light manufacturing industries, to be more effective in the country’s economic transformation agenda.

He also said countries like China that have sustained its economic progress achieved its prosperity through private sector-led growth.