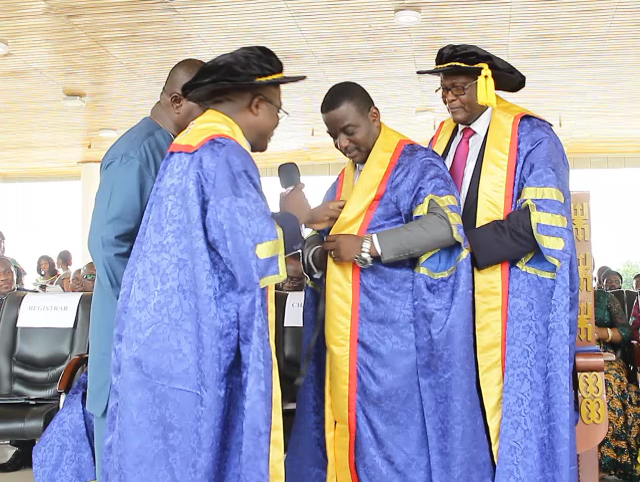 The colourful investiture was witnessed by academics, diplomats, government officials, traditional rulers, families and friends of the Vice-Chancellor.

Chairman of the Governing Council of the Cape Coast Technical University, Prof Harold Amonoo-Kuofi, administered the Oath of Office and admonished him to allow the Council and the Academic Board to function well.

The new Vice-Chancellor who takes over from Prof Osei-Wusu Achaw who occupied the position in an acting capacity pledged to provide quality leadership to make the University a centre of academic and technological excellence.

Prof Owusu-Sekyere indicated his vision was to make the University a leading, innovative and entrepreneurial technical university in Ghana with local, national and global influence.

Promoting sustainable academic and industrial collaboration, building a state-of-the-art ICT infrastructure to allow for the adoption of innovative practices and projecting the university as a partner in development are some of his key vision as he begins work officially as the Vice-Chancellor.

Prof. Owusu-Sekyere said he would work to ensure that the university fulfilled its mandate to produce graduates who were innovative, entrepreneurial in outlook, goal-oriented, critical thinkers and adequately equipped to provide solutions for local, national and global challenges.

“It is my vision to have the CCTU acknowledged as a major development partner to the Cape Coast Metropolitan Assembly,” he stated.

He promised to make research and publication a central part of the University, give prominence to staff development and advocate for infrastructural development.

“One of the things I want CCTU to be recognized for is its entrepreneurial acumen. Apart from our niche area, which is Renewable Energy, what will distinguish us from other technical universities, therefore, will have to be an entrepreneurial culture,” the Vice-Chancellor stated.

The university already carving a niche in renewable energy, the new VC says the University was making frantic effort to set up a renewable energy village and called for support from stakeholders to make that a reality.

Council Chairman of the university, Prof Amonoo-Kuofi, on his part, implored the new Vice-Chancellor to be guided by the rule of law, follow laid down rules and procedures to protect funds and concentrate on developing the niche area of the University.

” It is expected that the CCTU will become not only a centre of excellence for renewable energy knowledge and training but also the national reference centre for renewable information and expertise. Our students must be trained to acquire skills and expertise in this innovative area and become entrepreneurially minded,” he stated.

He advised him to build a strong relationship with education stakeholders without losing focus on the core mandate of technical universities.

Prof Owusu-Sekyere was appointed Vice-Chancellor by the University Council on Friday, April 12, 2019.

He is a Professor of Agricultural Engineering with rich experience in university management and leadership.

He began his academic career as an Assistant Lecturer, Department of Agricultural Engineering at the University of Cape Coast in 1998, and rose through the ranks to become a full Professor.