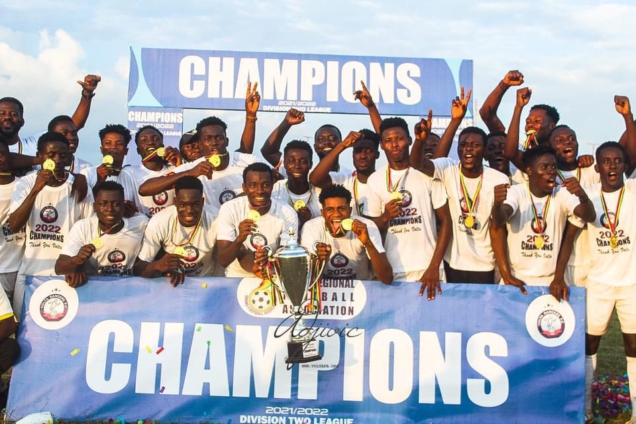 Volta Rangers Football Club has qualified to play in the National Division One League, after emerging winners of the 2021/2022 Volta Division 2 League.

A well-packed and tensed Ho Sports stadium produced euphoria football enthusiasts in the Volta Region had not experienced for some years now.

Rangers FC took charge of the game, right from the onset, dominating the first half with a couple of attacks in the first 20 minutes.

Agbogba FC, which was on the defensive, managed to create chances, with few shots on target.

Shoot stopper, Emmanuel Amegah, was unable to save a 21st-minute strike from the right foot of Rangers FC’s Safianu Usman, which produced the only goal of the game.

Rangers’ full-backs, Kojo Amankwah and Fredrick Kekeli put up a splendid performance to stop the frontline of Agbogba FC.

The duo delivered a difficult game for the attacking force of Agbogba FC, made of Moses Amemasor Baa and Cletus Akpalu.

Captain of Rangers FC, Hafiz Rahman, failed to double the lead for his side when he missed a spot-kick, hitting the crossbar in the 63rd minute.

The second half which saw an offensive play from the Aflao-based Agbogba FC failed to produce an equalizer.

The blast of the final whistle by the referee sent the Ho Sports Stadium into a frenzy mode, as fans of Rangers – mostly from Ho and its environs – sparked a jubilant mode.

The Southerners, who had travelled from Aflao to support Agbogba FC, mounted their buses and trouped out of the stadium disappointed.

Rangers FC picked the only available slot to join Hearts of Lions and debutants Akatsi All-Stars, to play in the National Division One League.

The week long Middle League saw a contest between 8 teams, which qualified from their respective zones of the Volta Division Two League.

DISCLAIMER: The Views, Comments, Opinions, Contributions and Statements made by Readers and Contributors on this platform do not necessarily represent the views or policy of Multimedia Group Limited.
Tags:
Division One League
Rangers FC
Volta Football Asociation