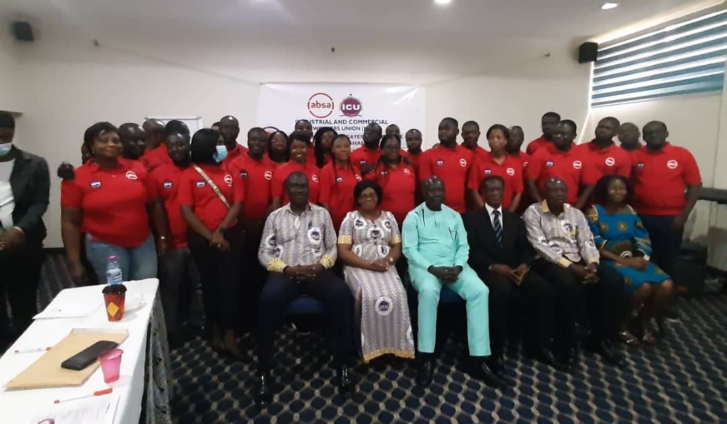 Union leaders of Absa Bank and some Executives of ICU

The Industrial and Commercial Workers Union (ICU) has charged management of organisations, to adhere to the provisions in Collective Agreements and the Labour Act, 2003, Act 651, to maintain and sustain harmonious relations at the workplace.

The General Secretary, Morgan Ayawine, also urged workers to be circumspect, sincere and honest in their relationship with management to ensure a harmonious co-existence.

He said such relationship is critical to help achieve organisational goals and also meet the expectations of the workers for better conditions of service and job security.

Mr. Ayawine, was speaking in Accra, at the Quadrennial Delegates’ Conference of the ICU Local Union of Absa Bank Ghana. The theme for the conference was: “The Bank’s Sustainability, The Union’s Concern.”

The ICU General Secretary, Morgan Ayawine, said, to avoid past mistakes and pre-empt recurring challenges in Union- Management relationship, there is the need for union leaders to tap into the experiences of their predecessors, so that they will learn lessons to guide their relationship with social partners that would impact positively on organisational goals.

Mr. Ayawine said the theme for the conference: “The Bank’s Sustainability, The Union’s Concern” eloquently suggests, the essence and relevance of a union at the workplace, where increased productivity and maximisation of profit for the sustainability of the business that would inure to the mutual benefit of the owners of the business and the workers whose sweat produced the profit.

The ICU General Secretary indicated that the theme for the conference could not have been more appropriate and relevant, considering the new world of work brought about by the emergence of the COVID-19 Pandemic.

Mr. Ayawine said the world of work has advanced into an era of industrial democracy and, as such, capital and labour have become equal partners.

According to him, it is important that one party in the equation cannot and should not impose itself over the other in that equal relationship, but both must collaborate on equal terms, in an atmosphere of give and take, for a sustainable industrial peace, harmony and progress at the workplace.

DISCLAIMER: The Views, Comments, Opinions, Contributions and Statements made by Readers and Contributors on this platform do not necessarily represent the views or policy of Multimedia Group Limited.
Tags:
Absa Bank
Collective Agreements
ICU
Morgan Ayawine