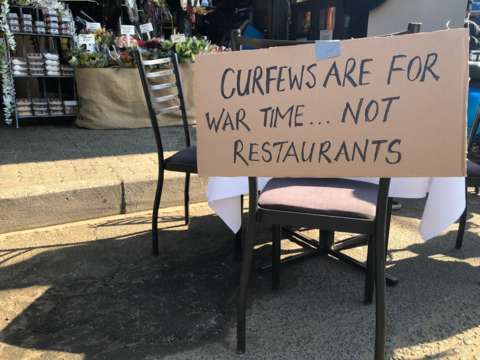 Restaurant owners and workers in South Africa’s tourist areas including Cape Town are holding peaceful protests against the government’s reimposed curfew and a ban on the sale of alcoholic drinks.

Pictures and videos shared online from Stellenbosch town in the Western Cape province show them holding banners warning of job losses if the government does not reverse the restrictions.

They also put out empty seats to show how badly their businesses had been hit by restrictions imposed to curb the spread of coronavirus.

One suggested that it wants a limit of two drinks per customer, as long as they buy a meal, in areas less hit by the coronavirus, Business Insider South Africa reports.

On 12 July President Ramaphosa introduced new restrictions, including another ban on alcohol sales, to help contain the spread of coronavirus.

He said the alcohol ban – South Africa’s second this year – would take pressure off the national healthcare system as it deals with rising numbers of Covid-19 patients.

Doctors and police say the previous ban in March contributed to a sharp drop in emergency admissions to hospital. But the country’s brewers and wine makers complained they were being driven out of business.

South Africa remains the hardest-hit country on the continent.

DISCLAIMER: The Views, Comments, Opinions, Contributions and Statements made by Readers and Contributors on this platform do not necessarily represent the views or policy of Multimedia Group Limited.
Tags:
Coronavirus in Africa
Covid-19 curfew
South Africa