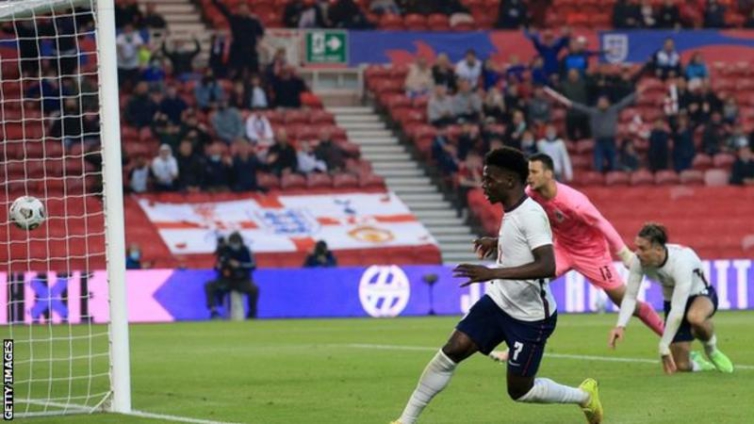 Bukayo Saka goal came in his sixth appearance for England

England’s countdown to the Euros continued with a narrow win over Austria at Riverside Stadium – but they suffered an injury setback as Liverpool defender Trent Alexander-Arnold limped off late on.

Manager Gareth Southgate saw his experimental side secure victory when Arsenal teenager Bukayo Saka crowned a fine move with an angled finish for his first international goal after 56 minutes.

Southgate, who named his 26-man squad for the Euros on Tuesday, picked a side with an unfamiliar look as players involved with Manchester United, Chelsea and Manchester City in the Europa League and Champions League finals were not selected, so he will be happy to come out with a win – but it was not a convincing display.

And as Alexander-Arnold walked gingerly around the pitch with the England medical staff, debutant Ben White cleared off the line from Alessandro Schopf after Pickford’s punch fell to him in the area.

The victory means England have won their past seven friendly matches, their best run in friendlies since winning seven in a row under Sir Bobby Robson between June 1985 and May 1986.