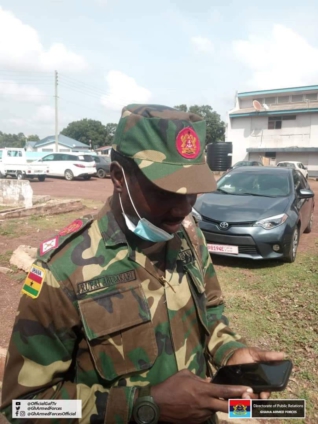 A self-styled ‘senior military officer’ is currently in the grips of the Police for impersonation.

The imposter, Rufai Abubakar, was nabbed by men from the Ghana Armed Forces (GAF), for posing as an officer of the army.

In a statement confirming his arrest, the Ghana Armed Forces noted that the suspect had been parading as a senior military officer, deceiving the unsuspecting public.

According to GAF, Mr Abubakar has been using the tag of a military officer to defraud gullible minds under the pretext of helping them to secure placements in the military.

His excesses however came to an end, after some personnel from the Ghana Armed Forces noticed his suspicious behaviour and arrested him, while trying to access a military installation inside Burma Camp on Thursday, December 1.

“The suspect who was dressed in a military camouflage uniform decorated with fake Lieutenant Colonel ranks, claimed he was stationed at Northem Command Headquarters and was proceeding to the Air Force Base to book a flight to Tamale”, the statement clarified.

Interrogations at the scene of his arrest further disclosed that “he posed as a Senior Military Officer to enable him to defraud one Mr Abdallah Abdul Fatahu from whom he had collected an amount of Three Thousand Ghana Cedis (GH¢3.000.00) under the pretext of recruiting him into the Ghana Armed Forces”.

The Ghana Armed Forces further indicated that at the time of arrest, the suspect had in his possession fake military identification and business cards and other documents bearing his name.

A follow-up search by the Military Police at his two residences at Ablekuma Fan Milk and Olebu respectively, led to the retrieval of documents including several certificates and fake Ghana Armed Forces recruitment application summary reports bearing names of defrauded persons, military uniforms and accoutrements and a toy pistol.

He has since been handed over to the Police CID for further investigation and prosecution.

Meanwhile, the Ghana Armed Forces has charged the general public to report any encounters with Abubakar to the CID, since he has even managed to deceive his two wives about being a senior military officer.

“Considering that his two wives living at Ablekuma and Olebu respectively were under the false impression that their husband was a real military officer, it is possible that many other persons may have fallen victim to his impersonations and fraudulent activities.

Such persons are entreated to contact the Police CID to help in investigations and to support GAF and the Security Services in weeding out the miscreants within our communities”, the statement concluded.

DISCLAIMER: The Views, Comments, Opinions, Contributions and Statements made by Readers and Contributors on this platform do not necessarily represent the views or policy of Multimedia Group Limited.
Tags:
Ghana Armed Forces
Impersonation
Military
Rufai Abubakar