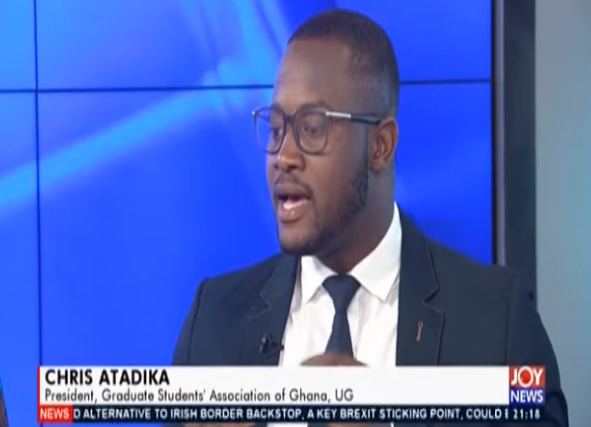 President of the University of Ghana chapter of the Graduate Students Association Ghana (GRASAG) has challenged businessman Senyo Hosi to substantiate his claims about authorship of thesis in the school.

“It is not true and we would want to challenge Senyo to give evidence of a student who has paid a TA to do their thesis for them because it doesn’t work that way.”

Mr Hosi has come under stern criticism after going on a tirade at a forum to mark the 70th anniversary of the country’s premier university.

He berated management and lecturers of the University for producing substandard graduates who pay TAs to do their research works for them.

“And respectfully, the old men running this school, they are too many, get them out. I beg you; you guys are not doing anything that is relevant for the future and you won’t get people wanting to employ the people out of this place.

“Your MBA students, plenty of them I won’t hire, your classmates, I won’t hire. I was also in that school. How many TAs haven’t written people’s thesis?

But Atadika finds these comments disrespectful to the University he is a graduate of.

He said it was impossible for any TAs to write thesis for students because the research works are rigorously examined at every stage.

“There are structures and systems in the University which curtail some of these malpractices when it comes to thesis submissions and what have you. There is a committee at the school of graduate studies which analysis and every research the graduate students do

“So it goes through a rigorous process to make sure that people come out with the best form or research as much as possible so when you say that TAs do thesis for graduate students which evidence do you have,” he queried.

Atadika also rubbished Mr Hosi’s claims that university education in Ghana is not fit for purpose because he, with is University of Ghana training has equipped him enough for the job market.

The BSc Administration curriculum at the University, he indicated, gave him the choice to learn an international business language, making it capable for him to be recognised internationally.

“We had presentations, seminars what presentations for a practical understanding of the corporate world. We have talk shows were industry persons come to talk to students and so on.

“So to just make a general statement that UG graduates are not fit for purpose, I will not hire them is below the belt,” he added.

A professor at the University’s Business School agrees with him.

Ebo Hinson who is at the Department of Marketing and Entrepreneurship said he can point to several people both locally and internationally who are making waves because they acquired some degree from that unit.

“But I guess the argument is if that is in the past, going forward what is the modus operandi? The university is saying that in its own strategy, plan it wants to create what it is calling versatility for staff and students.

“Now once you start using words like versatile, it means that you are open to innovations, new things. We are trying hard to innovate around the curriculum,” he said.

The bigger issue for him, however, is what education strategy the country, as a whole, is putting in place through the University Education Bill.

“In that Bill, do we have, for instance, an international education strategy in there where we have a national scale audit of how many engineers, doctors we need? Because that kind of macro-level planning feeds then into what we need to produce in order to fuel the economic drive going forward.

“Those discussions are not being had, and we are rather haggling over who will chair a council…that for me is important but not the germane issue at hand.”