Shatta Wale, 3 others to reappear in court today 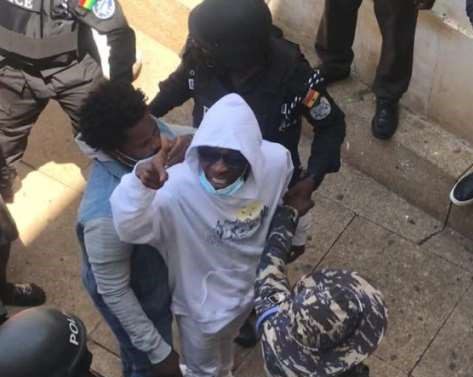 Reggae/Dancehall musician Shatta Wale and three others are set to reappear before the court this morning.

The singer, born Charles Nii Armah Mensah and his accomplices were remanded into prison custody by an Accra Circuit Court on Thursday, October 21, when they made their first appearance.

Shatta Wale, on October 19, turned himself in after the police had declared him wanted.

But when he appeared before the law court, he pleaded not guilty to the charge of publishing false news and causing fear and panic.

Likewise, they also pleaded not guilty to the charge.

Shatta Wale explained that he undertook the action on the back of a prophecy by Bishop Stephen Akwasi, who predicted his death.

In a viral video, the founder and leader of New Life Kingdom Chapel International noted that Shatta Wale would lose his life on October 18, similar to that of South African reggae artiste, Lucky Dube, who was shot on October 18, 2007.

Shatta Wale stated that he felt his life was under threat, for which reason he vowed that until security agencies step up to address such threats, his whereabouts will remain unknown.

The pastor in question was subsequently arrested on October 19 at the premises of Accra FM while preparing for an interview on the station’s mid-morning show.

He was charged for causing fear and panic. He however pleaded not guilty and was remanded into prison custody for five days.

However, on Monday, the pastor popularly known as Jesus Ahuofe of the New Life Kingdom Chapel was granted a ¢100,000 bail.

DISCLAIMER: The Views, Comments, Opinions, Contributions and Statements made by Readers and Contributors on this platform do not necessarily represent the views or policy of Multimedia Group Limited.
Tags:
Charles Nii Armah Mensah
court
Fake shooting
Shatta Wale