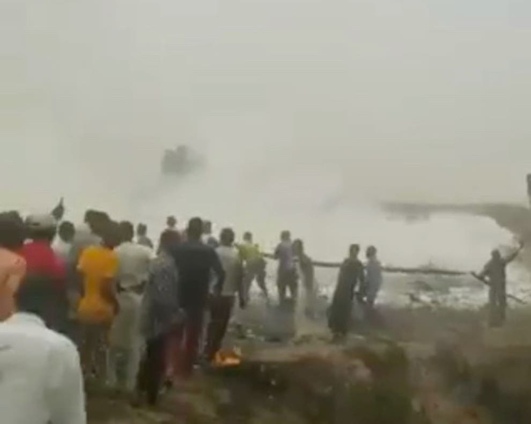 Six people died when a military plane crashed on Sunday short of the runway in Abuja, Nigeria, after suffering an engine failure, investigators said.

A military aircraft King Air 350 has just crashed short of our Abuja runway after reporting engine failure enroute Minna. It appears to be fatal. We should remain calm & wait for the outcome of investigation by the military, while we pray for the departed soul/souls if any.🇳🇬🤲🏽😩

He urged people to “remain calm and wait for the outcome of an investigation by the military, while we pray for the departed soul/souls if any”.

Unverified video showed fire and smoke at the scene and emergency crews using water cannons to douse the area.

After reporting an engine failure shortly after departure the 11-seater crashed on the final approach path of Abuja’s runway 22.

A statement from the country’s Accident Investigation Bureau provided to Arise News said the aircraft departed Abuja at 10.33am GMT (11.33am local time) with four passengers and two crew.

“Aircraft reported engine failure at time 10.39am [GMT] and crashed landed on the final approach path of Abuja Runway 22 at time 10.48am [GMT],” the statement said.

“Fire services are already at the scene of the accident. All six persons onboard reported dead.”

Minna is a city about 110 kilometres northwest of Abuja.

Africa’s largest economy has seen a series of air accidents in recent decades.

In 2012, 163 people died when a Dana Air plane crashed into an apartment block in Lagos in the country’s worst airline disaster in 20 years.