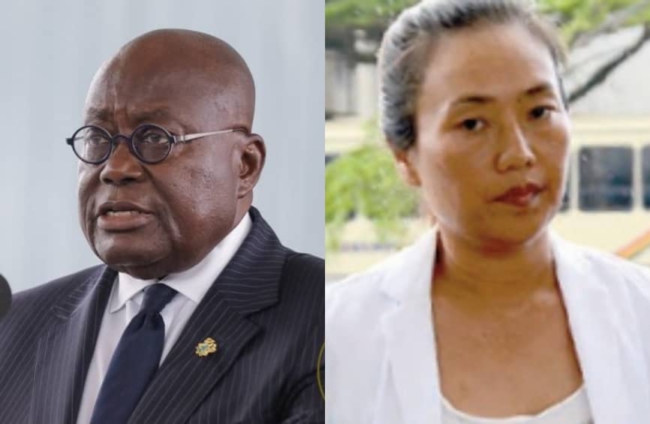 Scores of social media users have reacted to President Akufo-Addo’s latest comments about the deportation of ‘galamsey’ kingpin, Aisha Huang.

Speaking on Ho-based Stone City Radio on Monday, he said he is not sure whether Ms. Huang was deported or fled the country.

“But whichever way it is, she’s become the sort of nickname for all that galamsey represents”, Akufo-Addo said.

Following these remarks, some citizens have questioned the President’s handling of national security briefings and other vital pieces of information.

According to the critics, it is ‘unfortunate’ for the President to be in the dark about the movements of a woman who is perceived to be key in illegal mining activities in Ghana.

Through posts on both Facebook and Twitter, the critics therefore urged the President to update himself on efforts regarding the fight against illegal mining.

In 2019, the Senior Minister, Yaw Osafo Marfo (an appointee of the Prez. and an agent of the Gov’t) justified the gov’t decision to discontinue Aisha Huang’s prosecution. He stated that the gov’t had decided to rather deport her. Today, Prez Akufo-Addo says he’s unsure.. pic.twitter.com/Sn9RREpJOY

Akufo-Addo says he isn’t sure whether Aisha Huang was deported or fled the country.

To say he’s the worst President Ghana has ever had is even being charitable to him. Tueh!

In an excerpt of the interview where Akufo-Addo spoke about his uncertainty on Aisha Huang deportation, Information Minister, Kojo Oppong Nkrumah, appeared visibly alarmed by the President’s remarks.

This has also been widely criticised by some Ghanaians.

He’s like “Damn! Nana has given me another job to do” https://t.co/n72tBUUwoN

Hahahaa see Kojo Oppong Nkrumah’s face when President Akufo-Addo said he’s not sure whether Aisha Huang was deported or she fled the country and has come back 😂😂😂 pic.twitter.com/JRjtycRRkl

“I’m not still sure whether she (Aisha Huang) was actually deported or she fled this country” – H.E Akufo Addo.

[WATCH]: PR mistake as Hon. Kojo Oppong Nkrumah, Information Minister, appears to be shocked when the president, H.E. Nana Akufo-Addo said “I am not sure Aisha Huang left the country.”

According to the Ofoase-Ayirebi MP, “the reason for the President’s comments is that, there is a difference between deportation and repatriation”.

In a related development, the Attorney-General, Godfred Yeboah Dame, has expressed his resolve to prosecute notorious ‘galamsey’ poster girl, Aisha Huang for her past and recent crimes.

He says his outfit will deal swiftly with the issue and bring Aisha and her collaborators to book.

DISCLAIMER: The Views, Comments, Opinions, Contributions and Statements made by Readers and Contributors on this platform do not necessarily represent the views or policy of Multimedia Group Limited.
Tags:
Aisha Huang
Akufo-Addo
Galamsey
Illegal mining