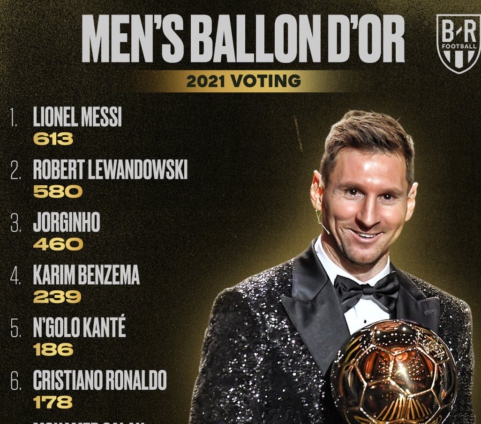 Paris St-Germain and Argentina forward Lionel Messi has once again proven to be the best there is when it comes to man’s favorite sport; football.

The 34-year-old on Monday won the 2021 Ballon d’Or – awarded to the best footballer of the year – for a record seventh time.

Many on social media have gone out of their way to express their excitement and congratulate the former Barcelona player. They insist that Messi deserves this award despite the good works of contenders such as Poland striker, Robert Lewandowski, Italy midfielder Jorginho and Real Madrid’s French striker Karim Benzema.

Messi’s known contender, Cristiano Ronaldo who has bagged five Ballon d’Or was sixth on the list.

The Argentina forward has helped his country win the Copa America, won his first international honour, and has scored 40 goals in 202 matches. He made 28 goals in Barcelona, four for Paris St-Germain and eight for Argentina.

Did Messi deserve the #BallonDor2021 Absolutely

Who deserved it more? That’s up for debate.

Is it a team award? Bro im starting to lose your entire argument here.
Its not Messi’s fault that last year’s ceremony was cancelled. Messi worked hard for this year results he deserves it.

#BallonDor2021 has zero credibility anymore.
Messi has done fuck all to deserve it apart from being Messi.
Joke.#BallondOr is dead now@lewy_official is really a 2 time holder now.

However, a section says this year’s award should not have gone to the 34-year-old. Their option is Robert Lewandowski who placed second.

Messi is a phenomenal and extraordinary player but the 2010 & 2021 Ballon d’Or should have gone to Sneijder and Lewandowski. That’s my own opinion.

Lewandowski not winning a well deserved #BallonDor might be the biggest robbery of 2021.

No disrespect to Messi but just winning it cause he led Barca to a title and didn’t do anything else compared to Lewandowski, is just crazy to me.

What statistics are you talking about?
Messi averaged 107 minutes per goal and assist. Lewy averaged 64 minutes. Lewy won the champions league he also has been the top scorer with 15goals in 10 matches in the previous season.Lewy has been phenomenal.