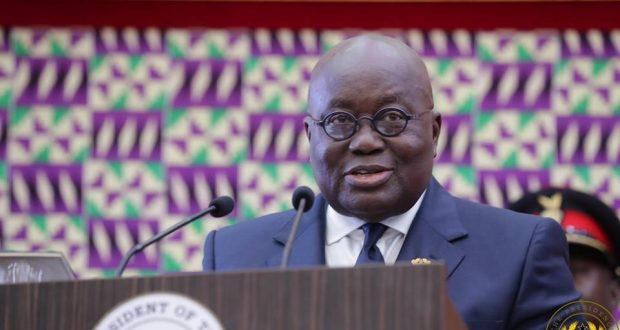 President Nana Akufo-Addo has broken his silence on the Menzgold saga pledging to ensure that schemes created to swindle Ghanaians of their monies are nipped in the bud.

At his third State of the Nation Address in Parliament, the president indicated a mega regulator in the financial services sector has been established to screen the activities of investment schemes that make fantastic and unsustainable returns to unsuspecting customers.

Menzgold is reported to have a client base of about 60,000, all of which were promised between 7% to 10% returns on special gold collectibles bought and deposited with the company.

The scheme that ran for at least four years finally came to an end after the Securities and Exchange Commission (SEC) ordered the flashy company to halt its unlicensed operations.

Since the order last September, customers have endured no small frustration in getting the company and its socialite CEO Nana Appiah Mensah to refund their monies.

NAM1, as the CEO is popularly called, was arrested in the United Arab Emirates where he is reportedly standing trial for a different offence.

Angry clients once again demonstrated this time around the Western regional mining community Tarkwa, which is said to hold at least 9,000 clients of the embattled company.

Popular dancehall artiste StoneBouy has also urged the president to speak to the Menzgold saga.

He has, albeit, saying little about the fate of the clients. He called Menzgold one of the rogue activities in the financial sector and admonished Ghanaians to learn from this “debacle”.

The President joined the general public complaints and disappointments over the saga.

“This is a tragic phenomenon that appears to have occurred in plain sight, and affected a lot of people, in spite of warnings from official institutions” he said.

It will be composed of regulatory institutions within the financial sector notably, the Bank of Ghana and Securities and Exchange Commission.

In the present however, the President signalled the state’s determination to find “a resolution to the matter, and those who are seen to have indulged in criminal activities, are brought to justice”