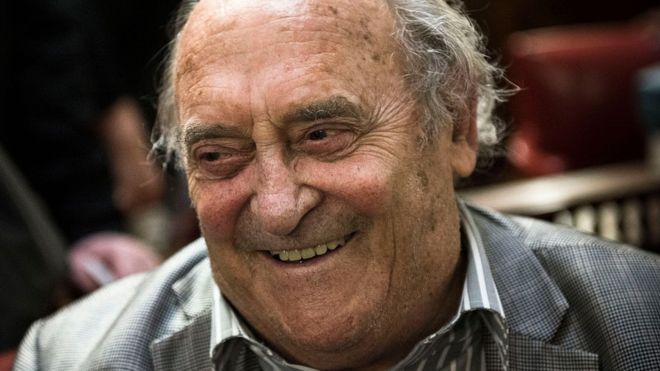 Veteran South African anti-apartheid activist Denis Goldberg, who was tried alongside Nelson Mandela, has died at the age of 87.

As a member of the ANC’s military wing, he was convicted of armed resistance to white-minority rule and sentenced to four life terms in 1964.

He was imprisoned for 22 years.

Confirming the news of his death on local media, Mr Goldberg’s niece, Joy Noero, said he had been suffering from lung cancer.

He “died peacefully” at his home in Hout Bay, near Cape Town, just before midnight on Wednesday, she added, saying that he “never stopped believing in his ideals”.

Apartheid was a legalised form of racism in which non-white people were treated as inferior. It governed every aspect of life in South Africa, and only while people were able to vote until the first democratic elections in 1994 when Mandela was elected president.

Mr Goldberg was a lifelong supporter of the African National Congress and became a member of the armed wing, Umkhonto we Sizwe, when it was formed in 1961.

Two years later, he was among the ANC officials arrested at a hideout in Johannesburg.

On trial with Mandela, they were convicted of sabotage, and sentenced to life imprisonment.

The black prisoners were sent to Robben Island. But as the only white person to be found guilty in the case, Mr Goldberg was separated from the others, and spent 22 years in prison in Pretoria.

On his release in 1985, he went into exile in the UK, but returned home to South Africa after the abolition of apartheid.

In later years he was a critic of the alleged corruption which came to define much of Jacob Zuma’s presidency of South Africa, reports the BBC’s Nick Ericsson.

DISCLAIMER: The Views, Comments, Opinions, Contributions and Statements made by Readers and Contributors on this platform do not necessarily represent the views or policy of Multimedia Group Limited.
Tags:
ANC
Apartheid
South Africa