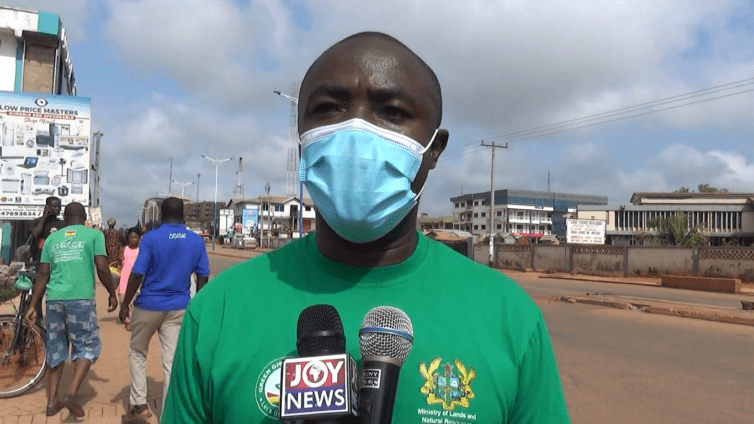 Sunyani is gradually losing hold on its cleanest city in Ghana accolade. A situation that has been largely attributed to residents’ failure to appreciate the need to keep their surroundings clean, though city authorities cannot exonerate themselves from blame.

Sewers in front of residential apartments, stores, and businesses are choked with filth from careless throwing of waste, thereby compromising the health of residents.

A lot more will and desire is required to implement bylaws targeted at improving sanitation with the hope of returning the “Suncity” to its glory days.

That is what Ansu Kumi, Sunyani East Municipal Chief Executive, has assured.

He admits laws have not been implemented as expected, and together with his Management, they would work to ensure the city is rid of dirt.

Ansu Kumi spoke to JoyNews during a clean-up exercise in the Municipality, organized by the Assembly. The exercise saw staff of the Assembly, led by the MCE, political party members, identified groups, and a section of the general public, sweeping, weeding, and desilting the drainages.

“We need to be quite proactive and pragmatic in the implementation of the laws so that the people will be able to get that awareness of at least ensuring their immediate surroundings are clean”.

“People have still not cultivated the sanitation culture in the Municipality. Residents drink water and drop the trash on the floor regardless of whether there is a waste bin or not. This attitude ought to be changed”.

Henceforth, Mr. Kumi said, the Assembly would try to enforce the bylaws and the laws enshrined in the local governance act, as well as the continuous sensitization of the people.

The MCE believes when they are able to achieve and sustain the right behavioral change, it will dovetail into the vision of President Nana Akufo-Addo on sanitation.

“I am still in talks with my Management, and I want them to buy into my vision on the way forward before I roll it out. Hopefully, by the end of November, 2021, we would come out with a clear-cut policy as to how to keep the city clean. And we would consider localizing the clean-up exercise, as long as it would inure to the benefit of the Assembly and the people”, he assured.

Sunyani Municipal Environmental Health Director, Daniel Owusu Korkor, noted that the deeply rooted attitude of most Ghanaians explains the sanitation challenges in the country. He insisted though that Sunyani remains the cleanest city despite the deteriorating sanitation conditions.

“Some of the people who joined us in the cleanup exercise left the trash of the beverage and water we gave to them on the same floor, an indication that a lot more work needs to be done on the mindset of residents on sanitation and the health implications”.

He commended the MCE, Ansu Kumi, who has been in office for barely few weeks, for his commitment to helping them get things right in the city.

“I am happy the MCE said he would help us implement the laws. Sometimes when we try to do that, some authorities above stop us, but he has shown some commitment, and we hope it will continue just like what the Greater Accra Regional Minister is doing. We hope some powers above him would not stop him”.

He thanked the MCE for the logistics provided for the successful clean-up exercise.

DISCLAIMER: The Views, Comments, Opinions, Contributions and Statements made by Readers and Contributors on this platform do not necessarily represent the views or policy of Multimedia Group Limited.
Tags:
MCE Ansu Kumi
Sunyani