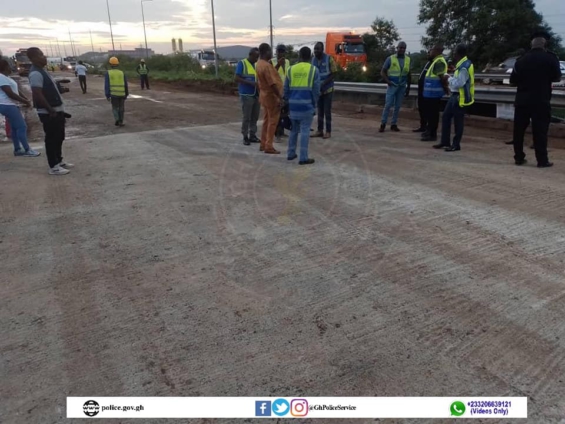 The Ghana Police Service has announced that the Accra-Tema Motorway has fully been opened to traffic.

According to the police, repair work on the Lakplakpa bridge along the stretch has been completed.

“Due to the repair works on the bridge, the Tema-Accra bound traffic was diverted onto the Accra-Tema bound lane since Monday, June 13, 2022, which caused a huge traffic build-up,” the Service wrote on Facebook.

Commuters on the motorway endured days of heavy traffic due to the renovation of some bridges on the 19-kilometre highway.

Earlier, the Ghana Highways Authority (GHA) had disclosed that the bridges have failed structural integrity tests, hence, the need to renovate them.

As such, they declared a national emergency.

Subsequently, the Roads Minister announced the team will complete the task on Friday, June 17 and was confident that the deadline will be met.

Kwasi Amoako-Atta noted that the team has been working day and night to reconstruct the deck, applying modern technology of concrete production and use to ensure that the road is opened to traffic by Friday, 17 June 2022 at 6:00am.

“Contractors working on the Beach road have been directed to ensure that the dual carriage sections are opened to traffic,” he said. Now that the motorway has fully been opened, the Police are grateful to motorists and commuters for their patience and adherence to the directives from the Traffic Police.