The Black Stars 10: No 6, Christian Atsu – the Ghanaian Messi 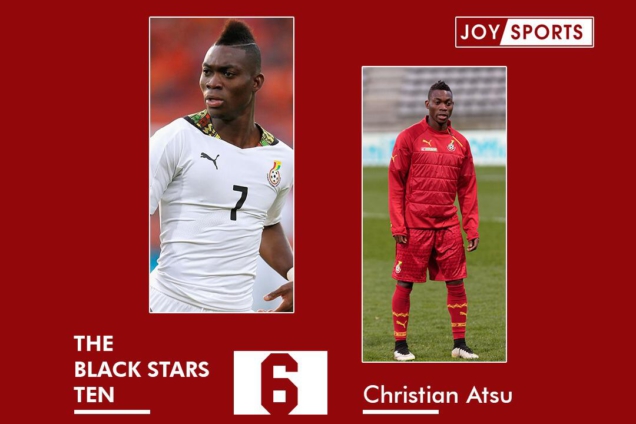 It almost feels as if the norm nowadays for Ghanaian fans is to refer to any talented left footed player with nimbly footwork as “the Ghanaian Messi”. Christian Atsu Twasam was no exception, his ability dance through defences looked magical.

The truth is, players with that calibre had been rare in the national team for a while. Atsu is the type of winger who demanded the ball to feet and certainly needed no invitation to beat defenders with his silky skills.

After several years without qualifying for the World Cup, two consecutive appearances at the global event meant that qualification was now the bare minimum for Ghanaian football fans – especially coming at the back of the 2010 tournament which saw Ghana narrowly miss out on the semi-finals.

It was June 1, 2012, a gameday in Ghana, a significant game because it was the opener for the 2014 World Cup qualifiers against Lesotho. The Black Stars were expected to win and did so, pretty comfortably, winning 7-0.

However, a star emerged on the day, his name? Christian Atsu. And all he needed was just 32 minutes. At just 20 years, Atsu replaced a more familiar face in Sulley Muntari before the 60th minute mark and scored his debut goal whilst playing a huge role in the 7th goal of the game – floating the corner that led to the goal.

Anytime Atsu touched the ball, the 30,000 fans in the stadium anticipated something marvelling. He went past the Lesotho defenders with ease and it was as if the ball was glued to his mysteriously pink boots.

His most significant contribution came in the 86th minute, Adiyiah found Atsu at the edge of the box with a scooped pass. Atsu controlled the ball with his left foot, set it up and curled the ball into the top corner. The keeper was rooted and didn’t even bother to dive, but three touches was all it took for Atsu have a chance to write his Black Stars legacy.

After such a monstrous performance, it was only a matter of time before the comparisons with Messi would start. The final confirmation Ghanaians needed was an Africa Cup of Nations qualifier against Malawi at the Accra Sports Stadium which saw Atsu once again take center stage. His dazzling feet made him untouchable and in less than 10 minutes, Atsu was on the score sheet.

After being treated to another reel of Atsu’s admirable dribbling skills, Ghanaians officially started calling him “the Ghanaian Messi”. Following the game, Atsu reacted to BBC Sport in a humble manner saying: “Messi is my idol. There’s no Ghanaian Messi. There is no other Messi in this world. I can never play even one percent of what Messi is doing. It’s impossible.”

Well, as expected his reaction didn’t prevent Ghanaian fans from calling him Messi because Atsu would also not stop dribbling his opponents. As the years went by, Atsu became more valuable to the Black Stars as he had risen into an indispensable status by 2015.

Atsu’s name pops when thinking of any Ghanaian player who has single-handedly dominated a recent competition. He finished the 2015 Africa Cup of Nations as the Player of the tournament, made the team of the tournament and won goal of the tournament. It could have been a complete package for Atsu had his shot which hit the post in the final gone in, but that’s the magnificence of the game; the narrow margins.

That goal would have been Atsu’s third of the tournament, which makes his achievements even more remarkable. A winger winning player of the tournament with just two goals is not a common occurrence, particularly in modern football and it just speaks of the brilliance of Atsu even beyond statistics.

In the 2017 Africa Cup of Nations, Atsu once again made the team of the tournament, this time, without any goals as his influence helped the Black Stars finish fourth.

In 65 appearances for the Black Stars, Atsu scored nine goals but that is not what he will be remembered for. One day, when stories of Ghana’s football in the 2010s are being told, there’ll be a mention of “the Ghanaian Messi”- a player who brought a flamboyant style that had been longed for in the Black Stars setup in the 21st century.

No 5 of ‘The Black Stars 10’ will be released on November 7 at 9am so keep an eye on the sports page.

DISCLAIMER: The Views, Comments, Opinions, Contributions and Statements made by Readers and Contributors on this platform do not necessarily represent the views or policy of Multimedia Group Limited.
Tags:
Black Stars
Christian Atsu
The Black Stars 10