NDC will better Free SHS not cancel it – Mahama 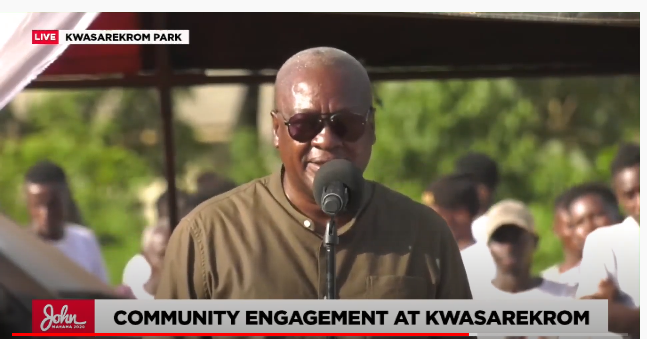 Flagbearer of the National Democratic Congress (NDC), John Mahama has reiterated his plans to better the Free SHS policy implemented by the New Patriotic Party (NPP) if he is re-elected to office.

The former President described the Akufo-Addo government as not being able to effectively run the policy to its maximum capacity.

“The Free SHS policy is a good thing, but governance requires the use of adequate knowledge the current government is unable to effectively run the system.

“Currently, Free SHS is putting a certain amount of burden on parents and their children, there are no dormitories, not enough classrooms nor administration blocks, the population of students have increased, many sleep outside and come home ill with bedbugs,” he said.

According to him, the NDC has always known free SHS was a way to go, but it must be done right, hence “we started constructing 200 SHS so that every child and student will get access to affordable education in a conducive environment.”

He expressed disappointment in the New Patriotic Party (NPP) for abandoning the uncompleted education structures he begun, which could have aided in the free SHS agenda.

In addressing the people of Kwasarekrom, he assured the cocoa farmers that their worry on cocoa pricing, cocoa feeder roads and the price of fertilizer shall be addressed.

“If you remember vividly, during my presidency, we handled effectively the prices of cocoa to benefits farmers and the country at large, we know the importance that must be placed on cocoa farmers, under my tenure, as soon as you sell your cocoa, you immediately get your bonuses, fertilizers were free of charge, unlike under the NPP government,” he said.

The Regional Chairman, Micheal Adu addressed the people of Kwasarekrom urging them to vote John Mahama into power coming December 7.

John Mahama promised a better Ghana if the electorates vote him and his government into power.

DISCLAIMER: The Views, Comments, Opinions, Contributions and Statements made by Readers and Contributors on this platform do not necessarily represent the views or policy of Multimedia Group Limited.
Tags:
Elections 2020
John Dramani Mahama
NDC and NPP manifestoes
politics and governance