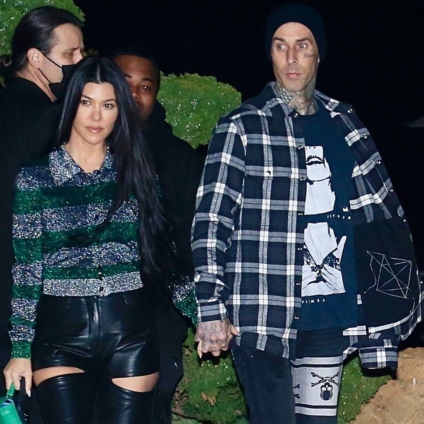 The couple has known each other for years, but it’s their new romantic relationship that has caused cybernauts to poke their fingers where it doesn’t belong.

The new couple have been setting the internet on fire with steamy hot photos of their public display of affection, although it has only been a month or two since they began dating.

Recently, Travis got a tattoo of Kourtney’s name on his chest and showed it off on Instagram, indicating that he is really smitten by his new found love.

Sources close to the Kardashians have revealed that his actions are reciprocated because Kourtney has expressed her desire to marry him someday.

It is certain that the lovebirds are enjoying their honeymoon phase especially after Travis’s grand birthday gesture went viral.

The rocker filled his girlfriend’s house with her favourite flowers; tulips and gardenias and even her sister Kim approved of the impressive floral arrangement.

He also took to his Instagram page and also wrote:
“I F–KING LOVE YOU!”
“YOU’RE A BLESSING TO THIS WORLD.”

Catch more of such juicy gossip on Joy Prime’s Fresh Juice which airs from 4:30 pm – 5 pm every weekday with Mauvie the Motivator.

DISCLAIMER: The Views, Comments, Opinions, Contributions and Statements made by Readers and Contributors on this platform do not necessarily represent the views or policy of Multimedia Group Limited.
Tags:
birthday
Kourtney Kardashian
Travis Barker