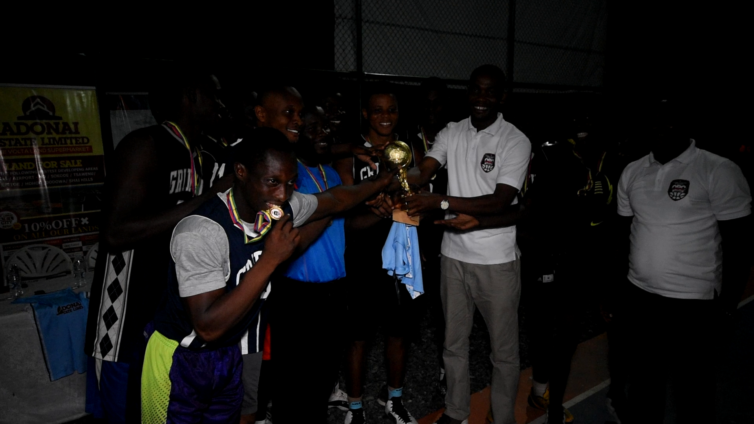 The Burma Camp-based Turbo-Jets have won the second edition of the Adonai Osagyefo Basketball Championship held at the Prof John Gyapong Multipurpose Court in Ho.

They beat Harlems of Ho in the final with a scoreline of 33:48.

Turbo-Jets went home with GH¢2,000, a trophy, a set of Jersey, and the bragging rights after failing to lift the trophy in the first edition a year ago.

The Coach of Turbo-Jets, Azah Constance, who couldn’t qualify for the finals of the 2021 edition said he had to study the playing styles and techniques of his opponents before the championship to help him strategise.

“Aftown Flames and the other teams are really strong sides so I watched their videos, I sometimes travel to Aflao to watch how they play the game”, he elaborated.

He lauded his team for their tactical discipline and the officials for doing a yeoman’s job, exhibiting an improvement in officiating compared to last year’s performance.

He appreciated Adonai Estate Limited for introducing the tourney to help unearth and promote basketball talents in Ghana and appealed to entities to sponsor the development of the discipline, especially in the Volta Region.

The Osagyefo Adonai Basketball Championship was introduced under the auspices of Adonai Estate Limited – a subsidiary of Adonai Company Limited, based in Ho – to commemorate the First President of Ghana, Dr Kwame Nkrumah.

The Chief Executive Officer of Adonai Estate Limited, Rev Dr Bright Adonai, said the initiative was also in line with the vision of his outfit to promote youth empowerment through sports, with a focus on lesser-known disciplines, such as basketball.

He detailed that talents identified during the annual basketball tourney would be provided with the relevant support and exposed to opportunities across the world.

He was hopeful this would create an industry to serve as a medium to create wealth and enhance the livelihoods of the youth.

“We organised this tournament to identify, promote and encourage talents that we have and get them deals at the national and international stage”, he said.

“We will also approach tertiary institutions to admit some of the identified talents who do not have tertiary education”, he added.

KBA Bruins, based in Tsito took an early lead in the opening match of Group A ending the first quarter with nine points, while their opponent, the Knights had six points.

They maintained the lead till the end of the fourth quarter, scoring 32 points, giving their opponents a two points gap.

The Pylons from Adidome were no match to the Harlems of Ho, in the Group B opening game and second match of the Adonai Osagyefo Basketball Tournament.

Harlems dominated the first and second quarters scoring 28 points against 6 points of the Pylons. They saw off the Pylons with a 40 points gap at the end of the game, occupying the top of the table of Group B.

Though the Knights recorded the first 2 points of their second game against Turbo-Jets from Burma Camp Accra, the Jets overturned this and won the first quarter with 13 points.

Turbo-Jets saw off the Knights 54:20 at the end of the fourth quarter.

The Adidome-based Pylons failed to identify an antidote for the technically disciplined Aftown Flames, exiting the competition with 24 points at the end of the fourth quarter.

The Aflao Flames made an emphatic statement with their performance scoring 76 points, the highest in the championship.

The last game of Group A saw KBA Bruins face off with Turbo-Jets, who finished the two-quartered game with 27 points against their opponent’s 16. Both teams, however, progressed to the semifinal stage.

Harlems secured a 30 points win over their rivals Aftwon Flames in the final game of Group B.

Aftown Flames had 20 points, hereby occupying the second position of Group B, beneath Harlems, setting a semi-final match with the Turbo-Jets.

The first semi-finals between Aftown Flames and Turbo-Jets was one of the fiercely contested games of the second Adonai Osagyefo Basketball Championship.

Turbo-Jets sailed their way to the finals with 39:37 against Aftown Flames, who had hoped to win the ultimate after missing out on it in the 2021 finals.

Tsito Bruins forfeited the second semi-finals against Harlems, hereby setting a final between Turbo-Jets and Harlems of Ho.

A 15 points gap was enough to aid the Jets to lift the trophy and own the bragging rights. The final scoreline was 33:48 against Harlems.

Harlems who had the second position was presented with GH¢1,000, while Aftown Flames had GH¢500 for occupying the third position.

DISCLAIMER: The Views, Comments, Opinions, Contributions and Statements made by Readers and Contributors on this platform do not necessarily represent the views or policy of Multimedia Group Limited.
Tags:
Adonai Estate Limited
Basketball
Turbo-Jets
Volta Region