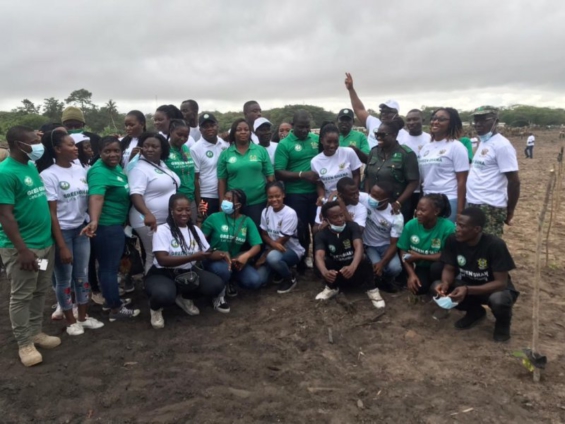 The Management of the University of Cape Coast (UCC), as part of efforts to support the Green Ghana Day, has planted more than 80,000 economic seedlings to restore its lost forest reserves and make the University Green again.

The Green Ghana initiative launched by the government in March is aimed at restoring the country’s lost forests, repair the damaged ecosystems and mitigate climate change.

At a brief ceremony to embark on the tree planting exercise, Professor Johnson Boampong, the Vice-Chancellor of the UCC, said trees were a unique creation of God that played important role in the existence of mankind and must, therefore, be properly taken care of.

“Trees are an integral part of the ecosystem, and human and other organisms depend on them to survive,” he stated and called for the protection of the country’s vegetation cover against destruction.

He said the University knew the importance of trees and vegetation to the sustenance of humanity, hence the project, was in line with the management’s vision to make the University Green at all times.

He underscored the importance of trees in providing mankind with oxygen, food, as well as beautifying the environment and serving as windbreaks and encouraged the students to plant and own the trees for the betterment of all.

To ensure the sustainability of the trees, Prof Boampong, said the University had connected pipes to water the plants daily to allow them to grow faster, and also, assigned officers to nurture, monitor and protect them to grow.

The layout in-between each planted seedlings is spacious enough to allow them to grow well for the expected outcome.

He said the government knew and understood that human survival depended on trees, therefore, protecting the forest and vegetation must be encouraged and accepted by all.

The Vice-Chancellor applauded the staff, workers and management of UCC for their immense support in ensuring the government and University’s vision was achieved.

Mrs Lydia Opoku, the Deputy Director of Operations of the Forestry Commission in charge of the Southern Part of the Country, encouraged every Ghanaian to at least plant a tree today to support the initiative of retrieving our forests and green belts.

She said the Green Ghana Project was not for the government but all and called on the public to get on board and collectively push the agenda forward to make Ghana Green again.

Deputy Commissioner of Police (DCOP) Dennis Abade, the Deputy Regional Commander, on his part, urged civil society, the security agencies and the general public to collaborate with the government in sustaining the environment.

He applauded the government for the great move and tasked other stakeholders to be part of the initiative to drive national development.

DISCLAIMER: The Views, Comments, Opinions, Contributions and Statements made by Readers and Contributors on this platform do not necessarily represent the views or policy of Multimedia Group Limited.
Tags:
Green Ghana Project
Professor Johnson Boampong
University of Cape Coast