US and China sign deal to ease trade war

The US and China have signed an agreement aimed at easing a trade war that has rattled markets and weighed on the global economy.

Speaking in Washington, US President Donald Trump said the pact would be “transformative” for the US economy.

Chinese leaders called it a “win-win” deal that would help foster better relations between the two countries.

China has pledged to boost US imports by $200bn above 2017 levels and strengthen intellectual property rules.

In exchange, the US has agreed to halve some of the new tariffs it has imposed on Chinese products.

However the majority of the border taxes remain in place, which has prompted business groups to call for further talks.

“There’s a lot of work to do ahead,” said Jeremie Waterman, president of the China Center at the US Chamber of Commerce. “Bottom line is, they should enjoy today but not wait too long to get back to the table for phase two.”

The US and China have engaged in a tit-for-tat tariff war since 2018, which has led to extra import taxes being levied on more than $450bn (£350bn) worth of traded goods. The ongoing dispute has disrupted trade flows, dampened global economic growth and unnerved investors.

At a signing ceremony in Washington, attended by top Republican donors and business leaders, Mr Trump said the deal sets the stage for a stronger relationship between the US and China.

“Together we are righting the wrongs of the past and delivering a future of economic justice and security,” he said.

“Far beyond even this deal, it’s going to lead to an even stronger world peace,” he added.

What’s in the deal?

Chinese Vice Premier Liu He, who signed the deal on behalf of China, said the agreement was rooted in “equality and mutual respect” and defended his country’s economic model in his remarks.

“China has developed a political system and a model of economic development that suits its national reality,” he said.

“This doesn’t mean that China and the US cannot work together. On the contrary, our two countries share enormous common commercial interests.”

“We hope both sides will abide by and keep the agreement in earnest.”

Mr Trump has said the accord signed on Wednesday is a “phase one” agreement and promised that the administration will take up other issues – such as China’s state subsidies – in future negotiations.

The US accuses China of “unfair” business practices, such as providing subsidies for domestic businesses and administrative rules that have made it difficult for US firms to operate in the country. 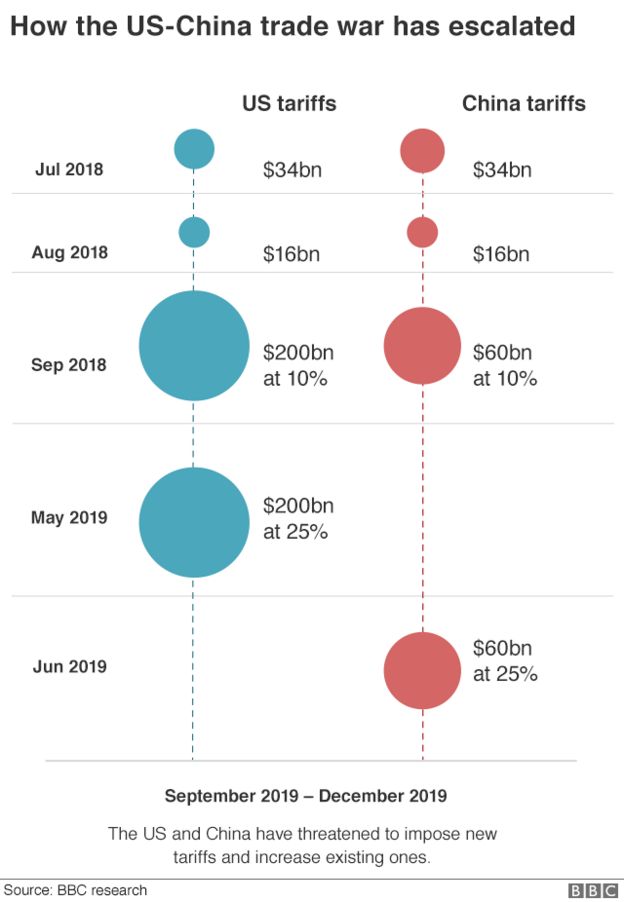 Mr Trump has defended maintaining the bulk of the tariffs, saying they will provide leverage in future talks. But US business groups and analysts expressed concern.

“While Phase One makes incremental progress, it remains to be seen whether it will deliver any meaningful relief for farmers like me,” said Michelle Erickson-Jones, a Montana wheat farmer, who is affiliated with the lobby group Farmers for Free Trade. “The promises of lofty purchases are encouraging but farmers like me will believe it when we see it.”

Charles Kane, a lecturer at the MIT Sloan School of Management, said Mr Trump sees China as a useful political scapegoat, making any serious negotiation unlikely until after the November presidential election.