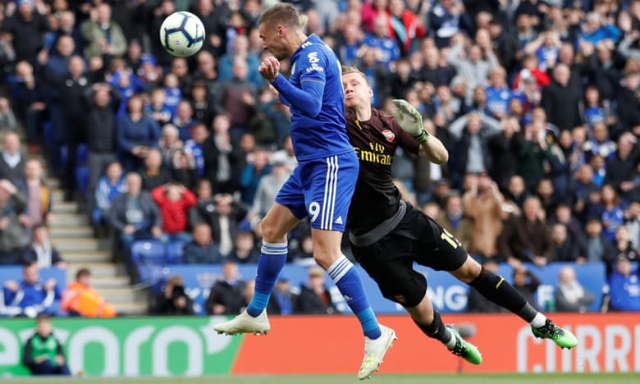 Jamie Vardy scored twice as Leicester dented Arsenal’s hopes of qualifying for the Champions League with a dominant victory at the King Power Stadium.

The unmarked Youri Tielemans headed in a cross from James Maddison just before the hour mark, before Vardy struck late on with a header and a tap-in from close range.

Arsenal played almost an hour of the contest with 10 men after Ainsley Maitland-Niles was sent off.

A third successive Premier League defeat left them a point behind fourth-placed Chelsea, who face Manchester United at Old Trafford at 16.30 BST on Sunday.

Leicester can still finish seventh – they are three points behind Wolves with two matches left – which could earn a Europa League place depending on the outcome of the FA Cup final.

Arsenal’s task was made significantly more difficult after Maitland-Niles was sent off for the first time in his career following two bookings in the space of 28 minutes – for a soft foul on Ben Chilwell and then needlessly scything down Maddison near the halfway line.

However, a three-goal margin flattered Arsenal and, even with a full complement of players, it is difficult to envisage a different outcome such was the conviction of the performance of Brendan Rodgers’ Leicester.

Arsenal were indebted to goalkeeper Bernd Leno for a string of fine saves, the pick a magnificent one-handed diving effort to paw away a Wilfred Ndidi header.

DISCLAIMER: The Views, Comments, Opinions, Contributions and Statements made by Readers and Contributors on this platform do not necessarily represent the views or policy of Multimedia Group Limited.
Tags:
Arsenal
Jamie Vardy
Leicester