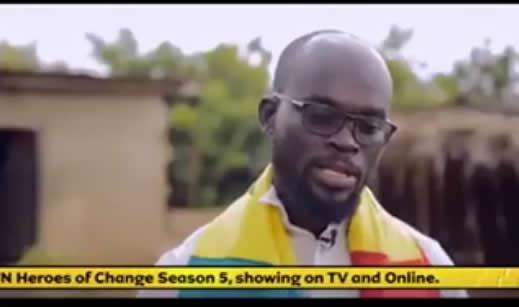 Abeku Adams was nominated for his volunteering work at Akyen Senior High School in Ekumfi in the Central region. The region faces social problems such as child trafficking, high school drop-out rates and poverty.

But with education seen as an escape route, facilities at the school where Abeku Adams volunteered, suffered a lack of logistics – a library without books.

He was inspired to begin a social media campaign, ‘Book The Shelves’, asking for books and funds to buy them.

It worked. After several weeks, he raised enough money and got books to fill the shelves.

“We thought it was a miracle,” a student said after he walked into the library to find it full for the first time ever.

Abeku Adams said with the books project completed, he feels a burden to ensure they are maintained.

He was part of ‘Fighters’ who entered Parliament and screamed ‘drop that chamber’. He was arrested along with their leader, Ernesto Yeboah.

They were released later and plans to build the new Parliament shelved.