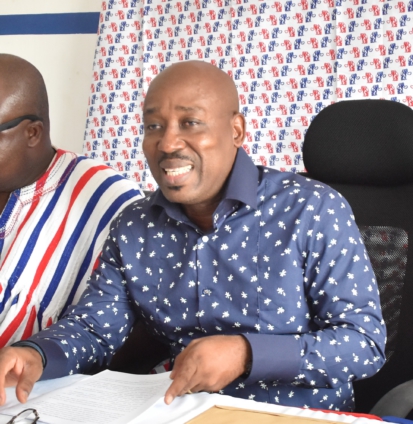 The Volta Regional New Patriotic (NPP) Chairman, Makafui Kofi Woanyah, has indicated that his party is making inroads in the region because it has demonstrated that it is development oriented.

He asserted that the youth in his jurisdiction have identified that the National Democratic Congress (NDC) only rides on their support to win power, but fail to promote development in the region, unlike the NPP.

Addressing the press in Ho, Mr. Woanyah condemned the NDC General Secretary, Fifi Fiave Kwetey’s call on residents of the Volta Region to identify his party as a religion, indicating the region will no more worship the NDC.

“His appeal to the region to accept the NDC as a religion is groundless. Our old folks might have been caught up in some baseless and unavoidable tribal sentiments fueled by propaganda in the past”, he said.

He stated that the youth are discerning and identify politics as a tool for development, hence would hold politicians and political parties accountable.

“It should not be too difficult for Fifi Kwetey and his NDC to understand why the people of the Volta Region, particularly the youth, would want to identify with the NPP and why the fortunes of the NDC should be dwindling.

Times have changed and the people are now wide awake and would demand accountability from politicians and political parties instead of any blind faith and religious attachment of a people to any political party”, he stated.

He said the NDC has nothing to show despite the unflinching support it enjoyed from the people of Volta Region, though it is the only political party to have enjoyed the longest period in government.

Mr. Woanyah said that the youth are aligning with the NPP because it has proven to be development-oriented, considering the numerous projects undertaken in the region by the Kuffuor and Akufo-Addo NPP administrations.

In the heath sector, he said district hospitals are being constructed under the Agenda 111 programme in the Afadzato South, Ho West, South Dayi, Agortime-Ziope, Akatsi North and South, Adaklu and Anlo Districts.

He outlined that the NPP government is responsible for the expansion of infrastructure at University of Health and Allied Sciences, listing the laboratory complex, lecture halls, faculty offices, School of Pharmacy, 2 hostels, construction of School of Nursing and Midwifery and inner campus road networks as some of the projects.

Mr. Woanyah said for the first time since Ghana’s independence, the Volta Region would soon experience  train services when the Tema-Mpakadan Railway project is completed.

“And since Kwame Nkrumah built the Adomi Bridge, the NPP government has constructed a rail bridge at Akradi across the Volta River to Ogli near Juapong and a modern terminal, all in the North Tongu Constituency”, he said.

He further listed the construction of sporting facilities in Ho and Hohoe, warehouses across the region, the Kpong Left Bank Irrigation Project, Keta Water Supply and Rehabilitation Project, Keta Sea Defense Project and revamping of Juapong Textiles as some major achievements of the NPP in the Volta Region.

“It is needless to mention that, the NDC cannot match our records even when they are given 20 years of uninterrupted rule of this country.

The NDC should brace itself up for further deterioration of their fortunes as the government of the New Patriotic Party continues it’s massive infrastructure development in all spheres of our national life and pursuit of policies and social interventions across the country and the Volta Region in particular”, he stressed.

The NDC’s votes in the Volta Region decreased by 2.9%, while their opponents, the NPP, recorded an increase of 3.3% in Presidential votes in 2020.

The opposition party also lost the Hohoe seat to the NPP, where John Peter Amewu recorded a historic win in the parliamentary elections.