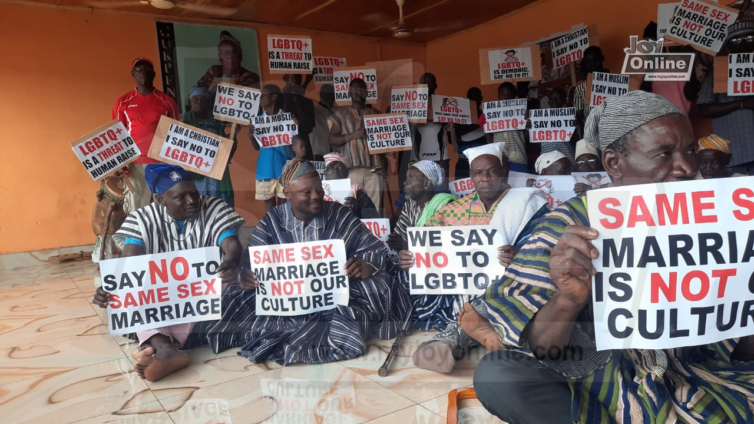 The Secretary to the Gulkpegu Naa, Mohamed Rashad, has advised LGBTQ+ supporters not to attempt to bring their activities into the Northern Region.

He said the practice is alien to the culture and traditions of the region and the Chiefs and people would not condone the act.

“Let us tell you that it is we human beings that institute these laws and anything that would come to stand in our way so that we will not be able to fight this LGBTQ+ we will crash that person,” he said.

Chief Rashad assured the people of the region that the practice would not be tolerated in the area.

“We will not tolerate it. If you want to practice it go to the moon, but if it’s in Dagbon we will deal with you” he said.

Mr Rashad made the remarks after an anti-LGBTQ+ group in the Northern Region, the Dagbon Youth Association presented the Chief with a petition pledging their support in the fight against the LGBTQ+.

The group is pushing for the speedy passage of the anti-LGBTQ+ bill which is before Parliament, adding that the protest is against the delay of the passage of the bill.

According to the members, the posture of the government and Parliament shows that the two institutions do not regard Ghanaians’ cultural, moral, and religious beliefs.

They said a couple of weeks ago, some billboards of the LGBTQ+ group emerged in the capital Tamale,  within 30 minutes the billboards were vandalised to send a signal to the group that the Northern Region would not tolerate them.

A member of the group, Yaw Sigbe Obed said the youth is poised to give the parliamentarian whatever support they need to get the bill passed.

He said if government and Parliament can pass the E-levy with the speed of light why can’t they do the same for the Proper Human Sexual Rights and Ghanaian Family Values Bill.

“We know that they bring bills to Parliament within a short time they pass it, but this is a bill they have brought there and it has been there and keeping long because of that we are here to tell our MPs that they should pass the bill,” Mr Obed said.

Mr. Obed stated that they stand in solidarity with the chiefs and parliamentarians who are fighting against LGBTQ+.

“Some of our leaders are working on it, they are helping us and we have to also help them to be able to frown against it. We are not coming out to fight anybody or war but to stand by our leaders and to tell them what they are doing we are in support.”