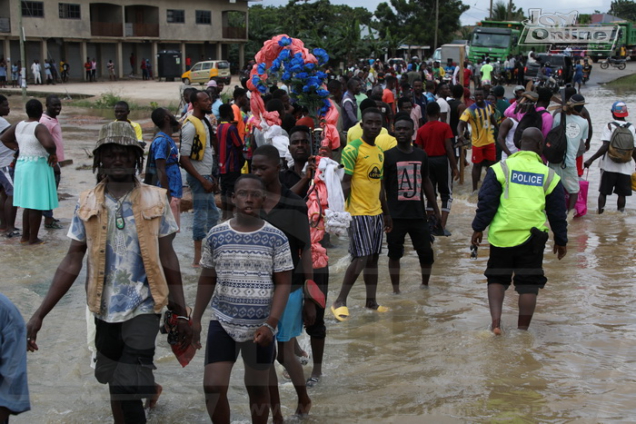 The National Disaster Management Organisation (NADMO) says it is working to expand and open more estuaries for the water from the Weija Dam spillage to run into the sea.

The Organisation said this will help curtail the havoc some residents of the area are going through.

While at that, it will also focus on escuing stranded victims.

A Deputy Director of NADMO, Abu Ramadan made this known.

“Expand and open estuaries so that the water can run into the sea so that we can see the levels drop. That is the main focus for now.”

Meanwhile, he also urged stranded victims to call the 122 emergency hotline for immediate evacuation or other forms of help.

According to him, the line is active all day.

“It is a platform that is reliable. Anytime the call goes through, somebody will pick up,” Mr Ramadan assured.

Scores of residents in the Ga South Municipality of the Greater Accra Region have been displaced with several others trapped in their homes as Ashalaja, Weija, Oblogo and Tetegu areas flood.

The residents have described it as a crisis situation as many homes have nearly been submerged.

Some have had to use canoes to avoid drowning. They describe the situation as a crisis.

“This stretches from the Weija dam. We heard that there was an overflow at Nsawam and anytime this incident happens, those around the Weija, Oblogo, Tetegu are the victims because there would be a flood definitely. Most properties have been washed away, and I think right now they need the help of NADMO,” a resident narrated to JoyNews.

DISCLAIMER: The Views, Comments, Opinions, Contributions and Statements made by Readers and Contributors on this platform do not necessarily represent the views or policy of Multimedia Group Limited.
Tags:
Abu Ramadan
NADMO
Weija Dam Spillage