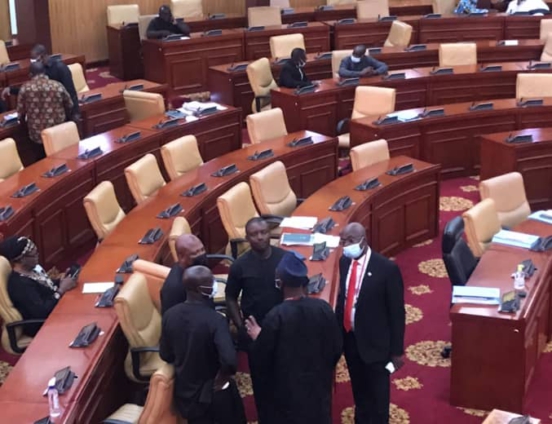 National Democratic Congress (NDC) Members of Parliament (MPs) today dressed in red and black attire to mourn what they say is the death of democracy in Ghana.

According to the Member of Parliament (MP) for North Tongu, Samuel Okudzeto Ablakwa, the just-ended 2020 Elections was anything but free, fair and transparent, hence their mourning.

He also stated that the NDC was mourning the use of violence in the 2020 elections and the militarization of elections in the country.

According to him, the wanton use of violence as a tool of intimidation in the just-ended elections is responsible for the death of six civilians and the stolen verdict of the people.

“We are also mourning the use of violence in our election. The militarization of elections in this country. We are mourning the killing of six unarmed civilians who were only seeking to protect their votes. We are mourning the wanton abuse of state power to arm twist, force electoral officers to declare results in favour of the ruling government,” he added.

Speaking to the press at Parliament, Monday, the North Tongu MP said if the New Patriotic Party wants the NDC to co-operate, then they should ‘respect the mandate of the people’.

He stated that the NPP was doing everything possible to deny the NDC the majority advantage; a situation the NDC is determined to resist.

“We have the majority, at least 138, Techiman South, Sene West belongs to the NDC. If they want us to co-operate at inauguration midnight from January 6, 2021, allow us to choose our speaker, the chairpersons of committees, let the majority side be accorded what it is due so far as the constitution and our standing orders are concerned,” Mr. Ablakwa said.

Concerning the recent demonstrations that supporters of the NDC have embarked on to demand justice from the Electoral Commission, Okudzeto Ablakwa said it was their constitutional right to register their displeasure about the electoral irregularities.

“It is their legitimate right to protest, to mass up, to picket, to engage in civil disobedience. It is constitutional, there is nothing undemocratic, there’s nothing unconstitutional about it.”

According to Okudzeto Ablakwa, until a final decision is made by the party as to how the electoral malfeasance will be dealt with, supporters of the party are free to register their displeasure within the limitations of the constitution.

“There’s a forensic audit team that is looking at all the pink sheets and putting our case for the possible challenge at the Supreme Court when we have to go there. So as the flagbearer indicated, all options are on the table, and those options must include the right to demonstrate, the right to protest, the right to picket and the right to engage in public manifestations. So at this point, everything is on the table,” he stated.

He further denied any attempt by the NDC to woo the Fomena MP to their camp.

Meanwhile, he insists the NDC won fair and square the polls in the Techiman South constituency and the Sene West constituency, giving them the majority in Parliament, they therefore have no need for the Fomena MP.

“You’d recognize that it is the NPP that is currently struggling to have him. They need him, so they can get to the magic number 138. We have 138 already, Techiman South belongs to us, Sene West belongs to us. We have won convincingly.

“Check the presidential results, over 6000 and we put out the margin of victory for the parliamentary, more than a 1000 votes. More than 1000 human beings. We have won a majority and that majority will not be stolen,” he stressed.