What have you done with the Minerals Royalties? – Adansihene asks government 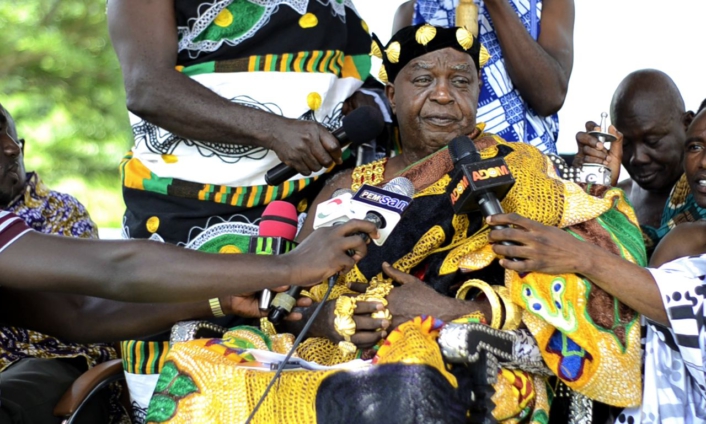 Chief of the Adansi Traditional Area, Opagyakotwere Bonsra Afriyie II is demanding accountability for the 55% minerals royalties paid to the government for mining activities in Obuasi.

The Overlord of Adansi says he is yet to see the government execute projects with the allocated percentage received from mining giant, AngloGold Ashanti for the development of Obuasi.

His comments come on the back of the retrogressive development of the mining town over the years despite continuous mining operations in the town.

“We will continue to support AGA in this regard but they cannot do all. What are the politicians also doing?

’’We don’t take home ex-gratia like you do. We just want to know what our royalties are used for. I am not saying you don’t use it for anything, rather we want to see clear evidence of its usage.

‘‘Every Ghanaian, sees what the country got from going HIPC. That is evident, and that is what we want to see from our royalties. Don’t use our royalties for payment of salaries, purchasing fuel and as housekeeping money,” he said.

Stunted development in Obuasi and its environs despite years of active gold mining has been a subject of public concern.

Obuasi, like many mining communities in Ghana, is still saddled with social, economic and ecological challenges.

In a bid to address these challenges, the government of Ghana in 1993 established the Minerals Development Fund.

Mining companies are thus expected to pay up to an estimated 5% of their total revenues as royalties to the state to be transferred to the fund.

Twenty percent of monies received is to facilitate implementation of development projects in communities affected by mining.

Currently, 80% of mining royalties go to the government, 10% to the Minerals Commission, 9% to the mining communities and 1% to the Office of the Administrator of Stool Lands.

But speaking at the launch of AngloGold Ashanti’s 10-year Socio-Economic Development Plan (SEDP), the Adansihene expressed worry over the inactions of the government regarding the use of state funds and resources.

According to him, the government must complement efforts by mining companies to see to develop mining communities.

Opagyakotwere Bonsra Afriyie II also promised that the traditional area will monitor the implementation of the 10-year SEDP to the benefit of the people of Obuasi.