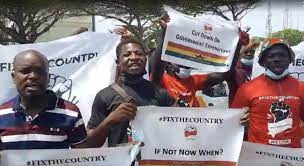 Convenor of the #FixTheCountry protest has queried the decision by the Ghana Police Service to allow the Youth Wing of National Democratic Congress (NDC) to embark on its July 6 protest.

Barker H Vogues, in a Facebook post on Friday, accused the Ghana Police Service of being selective in the application of the law.

“I find the reason the NDC is matching noble, but I am uncertain as to why they were allowed and we were denied. Have the Ghana Police Service changed strategy? We think the police should offer us an apology on this matter.”

He said, #FixTheCountry campaigners were denied the right to demonstrate but a politically affiliated group has been given the nod to hit the streets of Accra to exercise their right without hesitation.

According to him, “Our political systems thrive on quid pro quo and back-hand deals. Political parties and what they want always matter; You and I don’t!

“Apparently, some are more Ghanaian than others! Did Covid now disappear? After one whole month of chasing us about. Have the police reversed course? Why them? And why not us? What is the criteria? This selective application of the law is disgraceful and offends justice,” he added.

Barker H Vogues posted the comment after the NDC disclosed that the #MarchForJustice demonstration comes off on Tuesday, July 6, 2021. This was the outcome of a meeting held with the National Youth Organiser, George Opare Addo and the Inspector General of Police, James Oppong-Boanuh.

The 6 am demonstration which starts from the Accra Mall, seeks to demand justice for all persons killed and brutalised by state-sponsored thuggery and/or adventurism by police and military forces.

Commending the #MarchForJustice as a noble step by the NDC, Mr Vogues questioned the basis of the approval by the Police whiles a plan to hit the streets by the FixTheCountry was met with stiff resistance from the Police Service.

Describing the decision as disgraceful, the FixTheCountry convenor has demanded an apology from the Police service.