Woman absconds after she allegedly poured acid on her husband - MyJoyOnline.com

Woman absconds after she allegedly poured acid on her husband 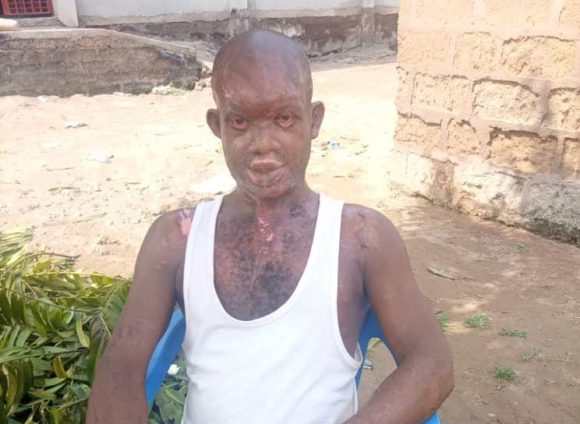 A 45-year-old woman suspected to have poured acid on her husband at Kwahu-Miaso in the Eastern has absconded.

On October 13, 2021, Doris Lamptey was reported to have attacked his husband, Isaac Lamptey, whom she had married for seven years without a child.

The victim, Isaac Lamptey, a mason and farmer, had returned home from Dodowa after working there for two months three weeks when he was attacked by his wife, who had also returned from work three days later.

According to Isaac, he rejected his wife’s attempt to have sexual intercourse with him because he was tired and pleaded that she allowed him to take a deep rest.

“She wanted me to help open her zip for her, which I did. Then, I went to bathe and eat. Then, she asked the children who were with us to close the gate.

“I went to bed, and she came to the room and asked me to sleep in a supine position, so she puts her head on me, but I didn’t because I was tired.

“I slept off, and after a while, I detected she had poured acid on my face and my body. I suddenly woke up and attempted to call for help, but she struck my head with a stick, so I fell.

“She thought I was dead, so she left me. I managed to get up and run away from the room screaming for help,” the victim narrated.

According to him, they never had quarrels until she started faking pregnancies.

The case, he said, has been lodged with the Nkawkaw Police Command for investigations but claims the Police have failed to initiate processes to apprehend the suspect.