New Zealand Prime Minister Jacinda Ardern has said there are questions which "must be asked" after the volcanic eruption on White Island.

Five people are dead and eight are missing on the island - though police say they are also likely to have died.

Officers earlier announced that a criminal investigation would be opened, but later revised this, saying it was "too early" to say.

Some 47 people from around the world were on the island during the eruption.

"We know there will be bigger questions in relation to this event," Ms Ardern said. "These questions must be asked and they must be answered."

Only last week, the threat level at the volcano had been raised from one to two, leading to questions why tour groups were still allowed to visit the island.

Thirty-four people were rescued, and most of them are still receiving treatment in hospital. Doctors said some of their burns are so severe they may not survive.

Police said they were "unsure" what state the bodies that remained on the island were in, saying they were probably "covered in ash".

The tourist attraction remains too dangerous to access, but reconnaissance flights conducted earlier on Tuesday saw no survivors.

People on the island were from New Zealand, Australia, Germany, China, Malaysia, the US and the UK, according to police. 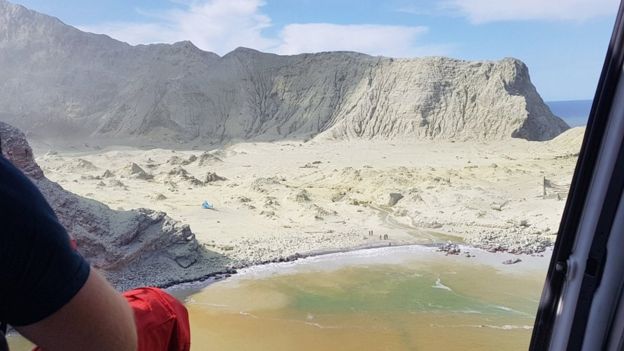 Ms Ardern said there were no signs of life on the island and that the focus was now "on recovery".

"To those who have lost or are missing family and friends, we share in your unfathomable grief in this moment at time and in your sorrow," she said.

Who was on the island?

They were 24 visitors from Australia, nine from the US, five from New Zealand, four from Germany, two from China, two from the UK, and one person from Malaysia.

The first victim to be identified was tour guide Hayden Marshall-Inman, a local of nearby town Whakatane, who according to New Zealand media has been named by his brother on Facebook.

The second person confirmed to have died is from Malaysia, the country's High Commission said.

Another tour guide from New Zealand, 23-year old Tipene Maangi, is among the missing - with his family telling media he was called in on his day off.

Officials said people that have burns to more than 30% of their bodies were in hospital receiving care. Several others are also suffering from inhalation burns. 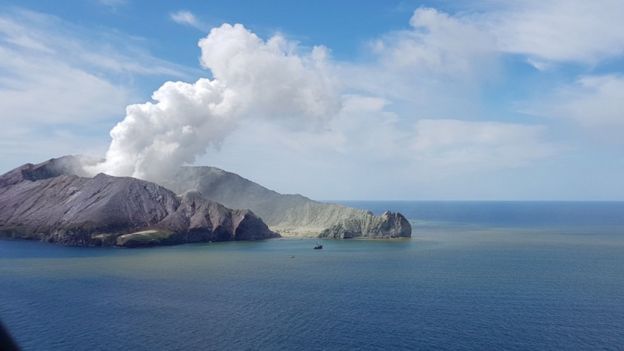 There was still smoke above White Island on Tuesday morning

Mr Morrison said that 24 Australians were on board a cruise ship exploring the island in the Bay of Plenty when the volcano erupted. Of those, 13 were in hospital and 11 were unaccounted for, he said.

"This is a terrible tragedy, a time of great innocence and joy interrupted by the horror of that eruption," Mr Morrison told reporters in Sydney.

"Can I say to our Australian family, there are no two countries closer and we are devastated at what has happened," she said. 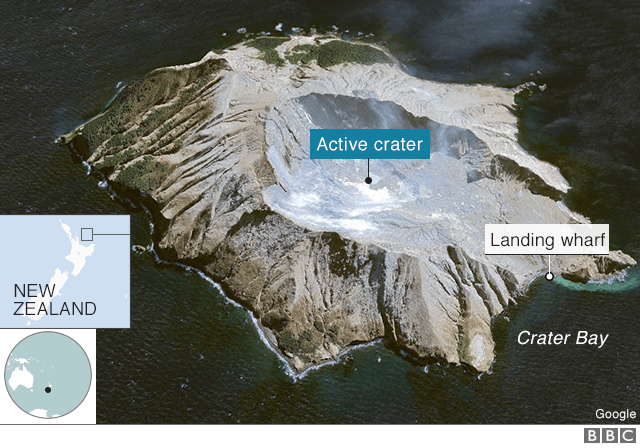 A web page has been set up by the New Zealand Red Cross for families to register missing loved ones.

What happened at the volcano?

White Island, also called Whakaari, is the country's most active volcano. Despite that, the privately owned island is a tourist destination with frequent day tours and scenic flights available.

The volcano erupted in two explosions in quick succession at around 14:11 (01:11 GMT) on Monday, sending up a thick plume of ash and smoke.

A live feed from the volcano showed several visitors inside the crater before the stream went dark.

According to Ms Ardern, there were two groups on the island at the time, "those who were able to be evacuated and those who were close to the eruption". 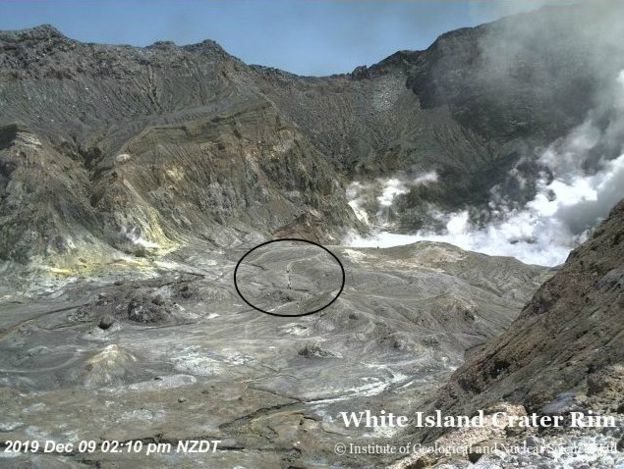 Some survivors were rescued by boat in the immediate aftermath of the explosion, but police said it was too dangerous to mount a rescue operation.

But later private helicopter rescue missions picked up several people from the island.

Speaking on Tuesday morning, Prime Minister Ardern paid tribute to helicopter crews who had flown to the island on Monday to bring people out despite the dangers.

"I want to acknowledge the courageous decision made by first responders and those pilots who in their immediate rescue efforts made an incredibly brave decision under extraordinarily dangerous circumstances in an attempt to get people out," she said.

Since then, emergency services have been unable to search the area because of dangerous conditions, with plumes of smoke and ash continuing to rise above the volcano the day after it erupted.

Authorities on Tuesday said there was a 50% chance of a second eruption of the same size or smaller in the next 24 hours but that it was unlikely there'd be a bigger eruption that would affect the mainland.

Labourer gets 7 years for defilement