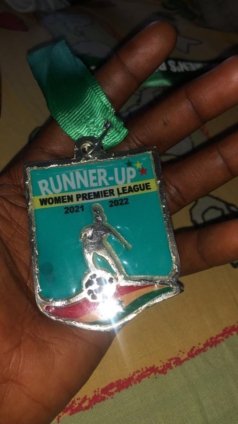 Chairperson of the Ghana Women’s Premier League Board, Hillary Boaten, says it is unfortunate the medals handed out at the final of the Premier League have been the talk of town despite a good 2021/22 season.

Images of the medal given to the players trended on social media over the weekend as football fans bashed the Ghana Football Association (GFA), over the nature of the medal awarded to the finalists.

In her explanation, the chairperson of the WPL board revealed the medals were manufactured by young artisans who were given the chance to showcase their works.

“It’s unfortunate that we even have to talk about the medals a day or two after a successful season and such a fantastic final that we witnessed,” Boaten told JoySports in an interview.

“Based on conversations with the FA, the medals were done by young artisans who were given an opportunity to prove themselves, so they are trying to master their crafts.”

Though she believes this season’s medals were an improvement from last year, Boaten believes there is still room for more improvement with regard to the quality of the accolade.

“I believe that the feedback has been taken in good faith. Next season it will even be better.”

In the final of the 2021/22 Women’s Premier League, Ampem Darkoa Ladies beat Hasaacas Ladies on penalties at the Accra Sports Stadium to clinch their third league title.

DISCLAIMER: The Views, Comments, Opinions, Contributions and Statements made by Readers and Contributors on this platform do not necessarily represent the views or policy of Multimedia Group Limited.
Tags:
Ampem Darkoa Ladies
Hasaacas Ladies
Hillary Boaten
Medals