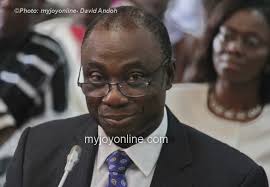 Former Minister for Power, under the erstwhile NDC administration, Dr Kwabena Donkor has stated that terminators of the Power Purchasing Agreement (PPA) between government of Ghana and Ghana Power Generation Company (GPGC) should be held accountable for the judgement debt incurred.

Speaking in an interview to be aired on JoyNews‘ Upfront Thursday, June 24, at 6pm, Dr Donkor said, “If this government (Akufo-Addo led government) really wants to hold somebody responsible, it should be the person (s) who terminated the contract, whose termination was ruled as wrong, by the arbitration panel and upheld by the London Court.”

Responding to a question in respect of who specifically should be held responsible for the termination of the contract, Dr Donkor said the government of the NPP should be blamed. He explained that the Energy Minister at the time, Mr Boakye Kyeremateng Agyarko, cannot be solely blamed for the $170 million judgement debt, “because Boakye Agyarko claims he implemented cabinet decision. Cabinet is only advisory. Cabinet decisions are not binding, we have and executive President”, he stated.

Dr Donkor emphasised that if the termination of the contract had been done according to the terms of the agreement, the judgment debt could have been avoided.

“The arbitration panel ruled that, they (NPP government) did not follow the termination procedure. And that is why they declared it wrongful termination.”

“It is not a one-sided provision. Either side could terminate. But there were conditions. So if the arbitration panel, and upheld by the court, says we terminated wrongfully, notwithstanding the process in place, why should Kwabena Donkor who left office in December, 2015 be responsible for actions taken in 2018.”

According to him, during the John Mahama-led administration, there were “far more senior” lawyers among the 275 MPs that scrutinized and approved the deal as being in the interest of the nation. Therefore, the current Attorney General cannot describe it as causing financial loss ab initio.

Speaking on Joy FM’s Super Morning Show Wednesday, June 23, Godfred Yeboah Dame said, “If you look at the agreement and the manner in which it was done, irrespective of whether it was terminated or it became effective, the government was exposed to a financial loss. And that is the problem.