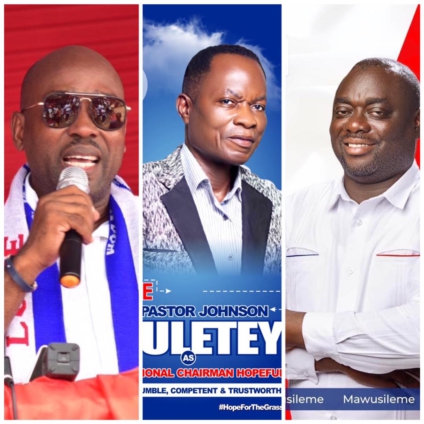 Stewards in the New Patriotic Party, (NPP) in the Volta Region are faced with a dicey decision to maintain or change the current crop of regional executives.

Out of the 36 aspirants who submitted forms to contest the upcoming Volta Regional elections, 7 were disqualified for various reasons.

The approved 29 aspirants would contest for the 10 regional executive positions.

The incumbent Regional Chairman, Makafui Kofi Woanyah, is hoping his contributions to the increase in the voting pattern of the NPP in 2020 would sway a majority of the delegates to endorse his candidature.

He jumped from a Regional Organiser to floor 4 candidates to become Regional Chairman at the 2018 Regional Delegates Congress held in Hohoe.

Chairman Woanyah, with the accolade ‘Major’ displayed dexterity by delivering on his promises which include but are not limited to, making the NPP popular in the Volta Region and building a Regional Secretariat for the party.

The Volta Regional Manager of the National Health Insurance Authority, Joseph Homenya, has also hit the grounds running to be elected as the Regional Chairman, after being cleared by the vetting committee.

Joe Wallace, as he is affectionately called, served as the Regional Secretary for two concurrent terms, playing a vital role in the NPP becoming dominant in the Volta Region.

He was instrumental in wrestling the Hohoe parliamentary seat from the NDC, in 2020 and the party’s Operation Eagle Eye in 2016, where alleged Togolese were stopped from entering Ghana to participate in the general elections.

Mr. Homenya tagged the darling boy of John Peter Amewu, MP for Hohoe, is expected to replicate the latter’s approach of getting things done by all means possible.

A former Volta Regional Deputy Minister, Pastor Johnson Kwame Avuletey, ignited his zeal to be given the opportunity to serve the party.

He is hoping to convince and garner votes from the delegates after losing the Chairman slot to Mr. Woanyah in 2018.

He preaches believes his in-depth knowledge of political affairs in Ghana, ‘with numerous awards to his credit’, makes him capable to man the Regional Chairman position.

A former aid to the Togolese Ambassador, who was a pillar in campaign activities which saw the NPP winning the only seat in the Volta Region, is eyeing the 1st Vice Chairman position.

He would face competition from Rev. Joseph Kwaku Wilberforce, Abdallah Mohammed Sadiq and Albert Kweku Bediako, who are touching base with delegates to share their vision and objectives aimed at achieving a common good for the party.

A one-time Deputy Regional Communication Officer, Enoch Amegbletor has revived his aspirations of clinching the Regional Secretary slot, after missing out on it to Joseph Homenya in 2018.

The current Regional Communications Officer, Pope Yao Yevoo, is part of the race which would elect a fresh head to man secretarial affairs of the party.

The former Akatsi North District Chief Executive, Dr. Prince Sodoke Amuzu, who is with the slogan ‘We’ve got work to do’ joins the race with a message of ensuring efficient management of the regional secretariat, party records, support party wings formation, funding, effective supervision and coordination at the constituency level. Kwasi Apea Fenteng is also eyeing the Regional Secretary position.

This gives the incumbent, Wisdom Gakpo, a field day hence would serve another term in office as Treasurer, until 2026.

The three who had filed nominations were disqualified by the Regional Election Committee chaired by North Dayi District Chief Executive, Kudjoh Attah for various reasons.

Hannah Ashade is expected to give the incumbent Regional Women Organizer, Afi Agyagbo Rejoice, a run for her money, as the former appears to have prepared and touched base with the grassroots during the 2020 electioneering.

She preaches to empower the grassroots through industrialization, skills and entrepreneurial training when given the nod by the delegates to occupy the position.

Afi Agyagbo Rejoice, is however, relying on her expertise and experience to take on Madam Ashade for the second time, after handing her a bitter defeat in 2018.

Mabel Agbletor comes into the Regional Women Organizer race as an underdog but her chances of clinching the position cannot be ruled out.

Markson Korku Seayor had his dreams of becoming the Regional Youth Organizer crashed, after the Committee disqualified him paving way for Emmanuel Quarshie, Israel Godsway Nekpo and Destiny Prince Tettey.

A 2018 casualty, Zain-UL-Abideen Ballah Sulleyman who desired to stage a comeback had his plans ditched, after he was disqualified by the Election Committee.

The regional elections would be held later in May 2022.