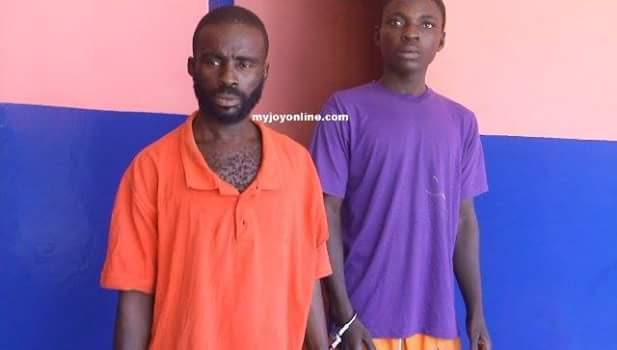 Three men who defiled a 14-year-old girl at Nkawkaw in the Eastern Region have been jailed 20 years each by a circuit court in Koforidua.

The convicts were charged on two counts of conspiracy to commit a crime, to wit defilement and defilement.

The convicts are; Mohammed Adams,19, driver’s mate; Awudu Kamilu,18, a head porter and Yaw Preko, 25, a cobbler, all residents of Nkawkaw in the Kwahu West municipality.

Two other accomplices, Junior and Sarfo who are at large have been declared wanted by the police.

The three pleaded not guilty to the charges in court despite admitting to the said crime in their statement to the police after they were apprehended.

An Assistant State Attorney, Dickson Donkor who prosecuted the case told the court that on March 5, 2017, the victim who sells ice-water at the Nkawkaw Lorry Park was returning from the house of one Issac at about 1400 hours.

On her way home, she met Yaw Preko, one of the accused, who stopped and proposed love to her.

Yaw Preko after his proposal was turned down,together with the other accused persons followed and caught up with the victim. They forcibly covered her mouth with their hands and carried her to a nearby bush.

The accused persons laid the victim on muddy ground and had sex with her in turns until the victim became unconscious.

The first accused suggested to the others that she be killed.

Mohammed then held the victim’s neck tightly to suffocate her. He further threw her into a nearby stream after they had mistaken her for dead.

Shortly afterwards the complainants by Kofi Boateng and Yaw Duah, both drivers at the Nkawkaw new lorry station, the victim was found and rescued.

A report was then made to the police leading to their arrest while the victim was issued a medical form for medical treatment.