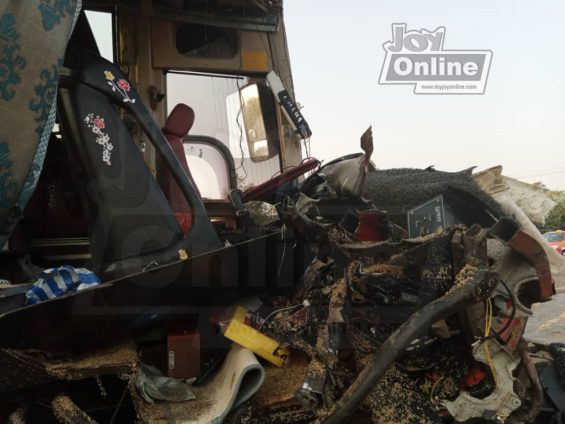 Five persons have been confirmed dead in a car crash on the Kintampo-Techiman highway close to the Tuobodom Senior High School in the Bono East Region.

Fourteen others sustained various degrees of injuries and are currently receiving treatment at the Holy Family Hospital.

According to the Regional Road Safety Director, Emmanuel Acheampong-Parry, a Kumasi bound KIA Grandbird with registration number KK-1-20 from Bolgatanga crashed into a stationary truck in the wee hours of Wednesday.

He indicated that the broken down vehicle, an articulator DAF truck from Burkina Faso with registration numbers; 11-KM-1338 (front plate) and 11-KM-7337 (rear plate), was left unattended with no warning triangle to signal the oncoming vehicle of the danger ahead.

The bus driver, whom he said was sleeping while driving at a top speed, crashed into the rear end of the stationary articulator truck.

Giving more details, Mr Acheampong-Parry said three adults made of two males and a female, and two children died in the crash.

He further revealed that out of the 14 injured passengers, two of them are in critical condition.