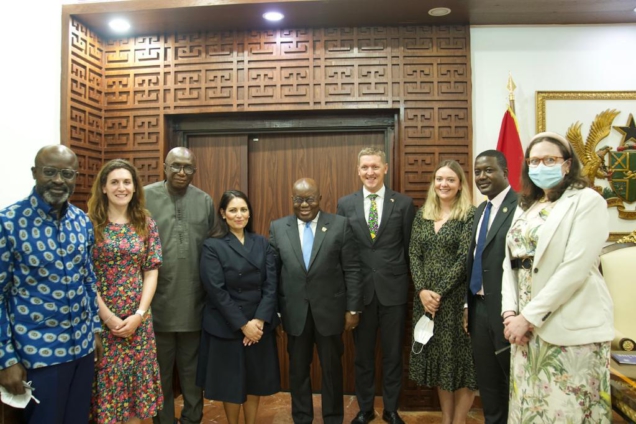 An eight-man specialised unit named the Ghana Immigration Task Force has busted a human trafficking syndicate operating in the UK with their counterparts in Apam here in Ghana.

The group which is sourced from the Ghana immigration service is to help fight organized immigration crime groups especially between Ghana and the United Kingdom.

This was revealed by the Comptroller General of the service, Kwame Asuah Takyi, when the UK home secretary handed over an office complex from which the task force will operate 24 hours a day.

“In February 2020, before the onset of covid-19 in Ghana, the team undertook an investigative cases in Ghana at a town called Apam which led to the identification and subsequent breakup of a syndicate in the United Kingdom. This was a major breakthrough for a teething Taskforce that is yet to assume full-scale operations.

“I am pleased to inform you that the location of this new office facility being commissioned today is strategically situated to enable the team to carry out its mandate effectively with stakeholders at the country’s busiest frontier, the Kotoka International Airport, and will be operational 22/7,” he said

The UK home secretary Pitri Patel who handed over the building said investing in the the project which started in 2018, is aimed at achieving high standards of investigations including appropriate handling of suspects while they are being processed for court.

“The GITF now has a permanent office and a secure area to store investigative materials. There is a space for training officers and interviewing suspects and victims, along with a custody suite. It means that the team will have the tools it needs to do its difficult, vital job.”

“Our new security dialogue will ensure we work closer together to crack down on these abhorrent gangs, making eth UK and Ghana safer” she said.

Ghana’s Interior minister Ambrose Derry who was also present at the handing over says, migration and border security remains a priority and the task force working together with the UK counterparts will clamp down on immigration related crimes including sexual exploitation and human trafficking.

“It is important to note that migration and border security are a priority to the agenda of both emigration and immigration destination countries, and the vision of safe movements across international frontiers can only be achieved through stakeholder cooperation,” he said

DISCLAIMER: The Views, Comments, Opinions, Contributions and Statements made by Readers and Contributors on this platform do not necessarily represent the views or policy of Multimedia Group Limited.
Tags:
Human trafficking
Immigration task force