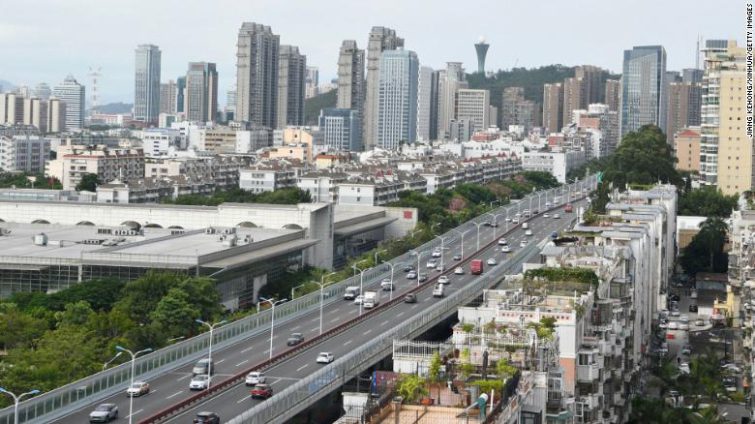 A murder suspect from Taiwan is believed to be stuck in hotel quarantine after fleeing to the Chinese city of Xiamen on Monday.

China’s stringent zero-Covid policy has allowed authorities to catch thousands of imported coronavirus cases. But, occasionally, it might help catch a fugitive too.

A murder suspect who fled to China hours after allegedly gunning down a man in Taiwan on Monday is now “trapped” in hotel quarantine upon arrival in the coastal city of Xiamen – setting himself up for an easy capture by authorities.

Since the pandemic, China has imposed some of the strictest border restrictions in the world.

Foreign visitors, from tourists to students, are largely banned from entering mainland China. Those few who are allowed in, as well as returning Chinese citizens, must undergo at least 14 days of centralized quarantine – and that goes for fugitives too.

The suspect, surnamed Huang, who is in his 30s, allegedly shot a 45-year-old man early Monday in New Taipei City, according to Taiwan’s Central News Agency (CNA).

The victim suffered two gunshot wounds to his neck and was pronounced dead at a local hospital later Monday, according to local police, who learned of the shooting at about 8 a.m. local time.

Huang, meanwhile, is alleged to have fled the scene in a silver car, which he is subsequently accused of abandoning in the parking lot of a shopping mall, CNA reported. He then allegedly attempted to cover his tracks by twice changing his clothes and taking different modes of transportation to reach Taoyuan International Airport, where he boarded a plane that left for mainland China around noon, the report said.

Huang is understood to be in quarantine at a hotel in Xiamen, CNA reported.

Taiwanese police are investigating the case, according to CNA. The report added that China’s Ministry of Public Security has received CIB’s extradition request.

In its reply to CNN, the CIB declined to comment on the progress of extradition, citing ongoing negotiation with Chinese authorities.

The suspect’s escape to China, first reported by Taiwanese media and later picked up by Chinese state media, has caused a stir on Chinese social media. On Weibo, China’s Twitter-like platform, two related hashtags have attracted a total of nearly 300 million views.

“(He) can escape arrest by Taiwanese police, but he can’t escape the mainland’s epidemic prevention and control measures,” said a top comment on Weibo.

“After arriving on the mainland, he must have been taken away for quarantine as soon as he got off the plane!” another said.

In a news conference Wednesday, Zhu Fenglian, spokeswoman for China’s Taiwan Affairs Office, noted reports of the shooting, without offering any details. “We are currently verifying details of the situation,” she said.

On Weibo, some users see the case as an opportunity to advance Beijing’s claim of sovereignty over self-governing Taiwan.

“I hope the trial will be held on the mainland and the central government will uphold justice for Taiwan compatriots, so we can truly benefit Taiwan and warm people’s hearts,” said one popular comment.

Taiwan and China have extradited suspects and convicted criminals across the Taiwan Strait in the past. But with relations between Taipei and Beijing at their lowest point in decades, it remains unclear how Beijing will react to Taiwan’s request this time.

Beijing views the democracy of 24 million people as part of its territory, despite the Chinese Communist Party having never governed Taiwan. For decades after the founding of the People’s Republic of China, animosity reigned between Beijing and Taipei, with trade, travel and communication largely cut off and military conflicts flaring.

But tensions began to ease in the late 1980s, and in 1990, the two sides signed the Kinmen Accord, which allowed them to hand over each others’ illegal immigrants, criminal suspects and convicted criminals.

In 2009, Beijing and Taipei signed a further agreement that institutionalized cross-strait crime-fighting and mutual legal assistance, covering “narcotics, smuggling, money laundering, fraud, corruption and other economic crimes.”Since then, Taiwan has received 502 suspected criminals from China, according to data provided by Taiwan’s Ministry of Justice.

Previous high-profile extradition cases include Taiwan’s former judge Lee Dong-ying, who fled to China’s southern Guangdong province after being convicted of corruption in Taiwan, and Chen Yung-chih, a top wanted criminal who was involved in at least five shootings on the island.

China, on the other hand, has received 21 people from Taiwan, according to the island’s Ministry of Justice.

But relations between Beijing and Taipei have grown frosty since Tsai Ing-wen from the traditionally pro-independence Democratic Progressive Party became Taiwan’s President in 2016. And with it, the number of cross-strait extraditions have also plummeted.

In 2015, Beijing handed over 63 wanted fugitives to Taipei. That number plunged to 17 the next year, and has been on the decline ever since. Last year, only four suspects were returned to Taiwan from China.And this year, as of September, not a single suspect has been extradited.